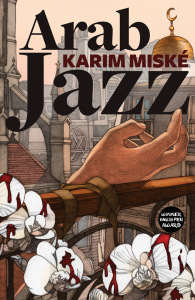 ‘Arab Jazz’ by Karim Miské (translated by Sam Gordon) marks the crime fiction debut of this French documentary film-maker of mixed Mauritanian and French blood. It is an unusual, original and seductive story, formally a police procedural novel but with a style, structure and pace that single it out  from many of its current counterparts.

‘Arab Jazz’ is set in a contemporary Paris that feels like a small provincial town, at the heart of the 19th arrondissement where everyone knows everyone else. It’s a multicultural small town though, which Miské populates with characters from as many ethnic and geographical backgrounds as possible: dreamy, post-depressive Ahmed Taroudant, the occasional protagonist, of mixed Algerian-African blood; M. Paul the Armenian book-seller; Sam the hairdresser, a Sephardic Jew who escaped Egypt and the post-Nasser purges; Laura Vignola, a French girl of Italian descent, a young air hostess and estranged daughter of Jehovah Witness parents who has been horrendously butchered in her flat at the heart of the 19th. One of the two lead cops is a local girl too, and as cosmopolitan as the neighbourhood: red-haired Rachel Kupferstein is French but her parents are Lithuanian Jews. Her investigative partner, Jean Hamelot,  is also French, but he too is an ‘expat’ in Paris, coming as he does from Brittany.

After Ahmed discovers the horribly mutilated body of his upstairs neighbour Laura – who had a crush on him – life in the small town-Paris of the 19th is turned upside down. Some of the crime’s features point to a possible religious motive of the fundamentalist type, though confusingly it could be both Jewish and Muslim fundamentalism. Yet, seen through the laid-back perspective of Ahmed, a former night-watchman who lives on social security as a chronic depressive, the crime’s impact takes on a rather syncopated, oneiric feel.

The same could be said for the police investigation. Rachel and Jean are a surprisingly unstressed, laid-back pair of metropolitan cops, or maybe it’s just that they’re the ‘intellectuals’ of the local police force – this seems to be the reason why their enigmatic boss, Mercator, has assigned the investigation to them, given its potentially religious overtones. The other reason is that Rachel, a well-portrayed blend of suaveness and grit, knows everyone in the neighbourhood. And so she and Jean conduct an ambling, low-tech investigation, talking to a host of local people and making, apparently, very little headway. For the neighbourhood, though unglamorous and far from grand, cutting-edge Paris, is nevertheless tightly-knit, almost impenetrable.

Alongside Rachel and Jean’s low-key efforts, Ahmed conducts his own ‘investigation’, consisting mostly in aimless musings, reminiscences and sudden insights. All with the haphazard rhythm you’d expect from a gentle, somewhat batty mind. Though he’s alert enough to fall for Rachel, who may or may not be willing to reciprocate. After all Ahmed, the victim’s neighbour, the man who discovered the crime and a mentally unstable subject too, is a potential suspect.

Karim Miské’s ability, and what makes this novel highly appealing, has been to graft onto this unusual urban crime tale another layer of mystery. Going full-tilt the religion road, he brings in shady Jehovah Witness characters, both home-grown and from New York, and an international drug racket masterminded by a Brooklyn rabbi, a gentle Jewish boy from Kansas with a penchant for chemistry and an insidious pair of  New York siblings, like Laura the offspring  of influential Jehovah Witness parents. To cap it all off, there is a connection to some nasty, corrupt and murderous Parisian cops – from nearby 18th arrondissement.

‘Arab Jazz’ is a heady cocktail, featuring an inventive mix of characters and a plot that, though looser and less devious than that of other contemporary crime novels, is original and gripping. The pace is occasionally that of a sedate Citroen, compared to the Aston Martins and Corvettes of many UK and US authors, though Miské works the short-chapter structure well and knows when a burst of speed is needed. In this respect,  the narrative and the setting are more reminiscent of Kurt Wallander’s semi-rural Sweden, though the characters are definitely urban. Yet again, a different sort of urban, with the (deceptive) homeliness you’d perhaps associate with  small-town people woven into a metropolitan, multi-ethnic mix. Which is by definition explosive, especially when blended with the twisted aspirations and dark desires of some of this fine crime novel’s characters. Well done Karim Miské, we’re looking forward to more Parisian melting-pot crime fiction from you.

Nicola Mira is a translator from Italian and French, specialised in journalism and non-fiction texts. Educated in the UK (BA Politics & Economics, St. Edmund Hall, Oxford), he has lived and worked in Italy, France and the UK. He currently lives in Cambridge. He has a Diploma in Translation (Italian to English) from the Chartered Institute of Linguists and is a member of the Society of Authors/Translators Association and English PEN. He translates texts from a range of industries, with fashion journalism his main focus. You can view his fashion translations on FashionNetwork.com. He has contributed to ‘In Other Words’, the journal of the British Centre for Literary Translation, and to London literary magazine Litro, where he also published a translation of an excerpt from Italian early XXth century author Gabriele D’Annunzio. When he is not translating, Nicola loves reading, writing and sports. He is the managing editor of sports statistics website Greatest Sporting Nation.
View all posts by Nicola Mira →
« Past Crimes – Glen Erik Hamilton
The Killing of Bobbi Lomax – Cal Moriarty »