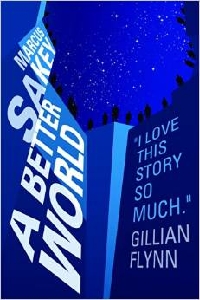 Meet the Brilliants; a group of people with special, but varying gifts involving extraordinary prescience, intellectual or perceptive powers. They use their gifts well and a Brilliant-led terror cell is causing problems for Federal Agent Nick Cooper in A Better World by Marcus Sakey.

Since 1980, 1% of the world has been born Brilliant. These savants have the ability to sense a person’s most intimate secrets, or predict the stock market, or move virtually unseen. For thirty years the world has been struggling with a growing divide between the exceptional – and everyone else.

Three cities are crippled by the terrorists: people are being burned alive, supermarket shelves are empty. It’s no use dialling 911, because there’s no-one to answer your call.

Nick Cooper is also a Brilliant, but he’s against everything the terrorists represent. America’s on the brink of civil war and it’s up to him to stay strong and outwit a band of people who want to destroy the world as we know it.

A Better World is the second instalment in Sakey’s Brilliance Saga (the first being Brilliance), and just from looking at its edgy, graphic cover of bright light and deep shadow, you know this is going to be an edge of the seat thriller. Described as a story set in a world ‘fundamentally different and yet horrifyingly similar to our own’, it’s clear that being born superhuman is not always the blessing you might imagine.

Marcus Sakey’s thrillers have picked up nominations for more than fifteen awards, been named New York Time’s Editor’s Picks, and featured in Esquire’s Top 5 Books of The Year. A movie adaptation of Brilliance is in development. It was to have starred Will Smith, but he’s been forced to pull out. Watch this space…

My name is Linsey and I love crime fiction. The rebel in me likes to see rules broken, and the mother in me feels a need to see order restored - perhaps it’s a Freudian thing. I love the dark introspection of Scandinavian crime fiction; the beauty and cruelty of the Italian giallo and a nice big slice of US hard-boiled psychological thriller. As soon as I decide where I’m going on holiday, I’ll find a fictional detective who lives there – yes, I want to see the sites, but I also want to read the underbelly. That’s what’s so great about crime fiction. I’m a freelance writer, based in Manchester England; a city with a few crime writers of its own. If you’re planning a holiday here, look up Cath Staincliffe, Val McDermid, Chris Simms, Bill Rogers and others. And if you need a writer, take a look at my website – but I’m not showing you my underbelly.
View all posts by Linsey Parkinson →
« Crime fiction blogs worth investigating (part 5)
To the Top of the Mountain – Arne Dahl »