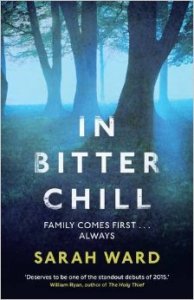 There’s always room on my reading shelf for a good police procedural novel, and ‘In Bitter Chill’, crime fiction debut by Sarah Ward, turned out to be a fine read indeed. Ward has taken an apparently unglamorous setting – a small town in Derbyshire, peopled by ordinary people and policed by ordinary coppers – and has populated it with disturbing crimes both past and present, cleverly zeroing in on the mental and physical havoc the crimes wreak on their victims.

Two eight year old girls were abducted on their way to school in Bampton, Derbyshire, on a chilly January morning in 1978. One, Rachel Jones, was found dazed and unharmed on the edge of a thick wood a few hours later. The other, Sophie Jenkins, was never found again.

37 years on, the story opens with the death, apparently a suicide, of Yvonne, Sophie Jenkins’ mother. A single mother – her husband had left before Sophie was abducted – a woman who had remained frozen in time, seared by grief for her lost daughter. No suicide note is found and the local investigators are in two minds as to whether they should seek for any connection to the 1978 tragedy, one that was never solved.

Bampton is a small town but the story touches many characters, in the present and the past, and Ward does a good job of gradually building them up and getting the reader acquainted with them. She lets past events unfold without intruding into the present, and slowly assembles a tense narrative out of the police’s tentative efforts and the doubts, discomfort and unease that grip all those who have a link with the two abducted girls.

Above all, the girl who returned: Rachel Jones, now a genealogist and a single woman determined to live her life away from the shadow of the 1978 tragedy. But also her grandmother Nancy, a feisty octogenarian who’s survived Rachel’s mother Mary, and is the only remaining family link for Rachel to her troubled childhood. And Penny Lander, a retired teacher who taught at Rachel and Sophie’s school, who has suddenly developed an interest in Bampton history and events dating back many years before the tragedy.

Along with other local residents, they prove to be a singularly difficult bunch to approach for the lead investigators: broody, smart DI Francis Sadler and young, keen DS Connie Childs. Initially this is mostly due to the fact that it’s not clear, in the wake of Yvonne Jenkins’ suicide, what there is to investigate, if anything. But Connie in particular is fascinated by the unresolved mystery of Sophie’s disappearance, and will find plenty for herself and Sadler to sink their teeth in when Penny Lander turns up dead, strangled on the outskirts of the same wood where Rachel Jones was found after the abduction.

Penny Lander’s death gives new impulse to the investigation, but its direction is still unclear, and the link to past events still tantalisingly vague.

Ward’s ability in creating a plot that’s like a puzzle within a puzzle is remarkable. She manages to conceal as much as possible until the very end: motives, events, even identities, nothing is clear and no one is quite what he or she seems, or is thought, to be. The story is about how secrets have a way of insinuating themselves into family dynamics and remaining hidden there, embedded deeply and sometimes over incredibly long periods of time. About tightly-knit families in a small town, where everything is normal on the surface but where the accretion of time over actions that people want to forget or hide creates an impenetrable covering layer.

Ward gives a nuanced edge to what is a classic police procedural story, and does it by striking a good balance between detection and psychological insight. Rachel Jones and her grandmother Nancy are powerful figures, with a complex background that is intriguing to discover. And the two lead cops, Sadler and Connie Childs, though etched in slightly blunter relief, are very engaging too. It is a measure of Ward’s attention to detail that she occasionally dwells, but never to the detriment of tension and pace, in the mundane details of working life in Bampton police station, adding another layer of realism to the story.

But her main skill, for which I look forward to another instalment of Derbyshire crime, is in painstakingly, effectively rendering how the secrets of the past can lock people into desperate situations. She does so by getting under her characters’ skin, close to their deepest yearnings, making us realise that we may easily share some of these yearnings, if not similar, deeply-buried secrets.

Interview with Sarah Ward (author of ‘In Bitter Chill’)

Nicola Mira is a translator from Italian and French, specialised in journalism and non-fiction texts. Educated in the UK (BA Politics & Economics, St. Edmund Hall, Oxford), he has lived and worked in Italy, France and the UK. He currently lives in Cambridge. He has a Diploma in Translation (Italian to English) from the Chartered Institute of Linguists and is a member of the Society of Authors/Translators Association and English PEN. He translates texts from a range of industries, with fashion journalism his main focus. You can view his fashion translations on FashionNetwork.com. He has contributed to ‘In Other Words’, the journal of the British Centre for Literary Translation, and to London literary magazine Litro, where he also published a translation of an excerpt from Italian early XXth century author Gabriele D’Annunzio. When he is not translating, Nicola loves reading, writing and sports. He is the managing editor of sports statistics website Greatest Sporting Nation.
View all posts by Nicola Mira →
« Snow Blind – Ragnar Jonasson
Target Churchill – Warren Adler, James C. Humes »