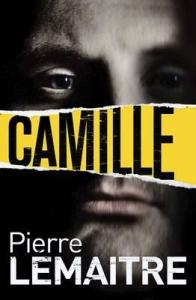 With ‘Camille’, French author Pierre Lemaitre (translated by Frank Wynne) has brilliantly completed the trilogy begun with ‘Irène’ and continued with ‘Alex’: chapeu! Both of its predecessors are first-rate crime novels, but ‘Camille’ stands out as one of the best I have read in recent months. It contains all the essential elements of great crime fiction: an original plot, headlong pace, more twists than a slalom course and engaging characters, all conveyed in Lemaitre’s versatile, polished style, dry when it needs to be and always adroit at portraying the inner workings of his characters.

There is so much to say about ‘Camille’ that I do need to be more specific, but I’m also wary of spoiling the plot, so I’ll deal with the latter as briefly as possible. The protagonist, Parisian Police Judiciaire Commandant (DCI) Camille Verhoeven, who was at the dramatic centre of events in ‘Irène’ (which ended with the sadistic murder of Verhoeven’s wife) and ‘Alex’, bluffs his way into handling the case of an armed robbery which left a horribly battered woman in its wake. The woman, Anne Forestier, is Verhoeven’s girlfriend and he shouldn’t be anywhere near the case. Yet he does manoeuvre himself into investigating it… and things immediately begin to go wrong: Verhoeven has precious little clues, his investigative moves lead him and his team nowhere, requiring even more subterfuge on his part to continue handling the case in the face of his superiors’ initial bewilderment and subsequent hostility. What’s worse is that the robber gang’s leader is hell-bent on killing Anne Forestier – finishing off is the right word, given how she was left after the robbery – the first attempt taking place when she’s still in intensive care in hospital.

I really cannot say any more about the plot, it’s too packed with surprises. There are other elements however which make ‘Camille’ a great novel, chiefly the originality of the narrative structure and its protagonist, Camille Verhoeven. Lemaitre adopts for ‘Camille’ a structure made up of short, clip-like sections within longer ‘chapters’, the days over which the events unfold. He balances these sections supremely well, in synch with the breathless pace of the story, giving a palpable sense of the pressure on Verhoeven, of Anne Forestier’s terror at being stalked,  and of her hunter’s rabid pursuit.  Lemaitre’s real success is making this structure work together with a layered plot: despite the frequent shifts in focus, and the abundance of surprise twists, it’s easy to follow how the story unfolds. Or rather, how Lemaitre wants the reader to see the story unfolding…

And there is Camille Verhoeven, the story’s protagonist and one of the most engaging, interesting fictional cops around. Only 4’11’’, Verhoeven makes up what he lacks in height with relentless drive and razor-sharp intuition. We meet him in ‘Camille’ after he’s returned to policing following a lengthy compassionate leave, including treatment in a psychiatric hospital, after the tragic outcome of the case featured in ‘Irène’: he did catch the criminal but lost his beloved wife for it.

Lemaitre resists the temptation of making Verhoeven a dark knight and portrays him as a man who, though shaken to the core, still believes in his work and refuses to give up on life. Not much of  a life, admittedly, lived mostly among criminals or cops, only occasionally mellowed by his talent for painting and the company of his cat Doudouche.  But shaken he is, and in ‘Camille’ we see Verhoeven making mistakes, taking risks with the desperate courage of someone who knows  he’s not functioning well, but is determined to do anything to stand by his principles.

Lemaitre brilliantly portrays Verhoeven’s mind’s inner workings, his doubts and fears and grim determination, all the more effectively for not letting this disturb the flow of the narrative. The picture that  emerges is that of a man who’s a great detective but no Super Hero. He blunders occasionally because he’s human and the choices he makes define this humanity. Verhoeven isn’t likeable in the conventional sense, he’s much too driven, but his underlying compassion does strike a resonant chord. He struggles to keep an even keel in the midst of the harrowing hunt for Anne Forestier’s enigmatic hunter– sometimes managing it, sometimes not.

Almost as engaging as Verhoeven is the story’s bad guy. Here again Lemaitre pulls an innovative trick, by casting him in first person narrative, unlike the rest of the narration which is in conventional third person, adding an extra element of urgency and immediacy to a story that’s already fast-paced.

Whichever way you look at it, ‘Camille’ is a brilliant crime fiction novel, and Pierre Lemaitre a talented writer worth looking out for.

Nicola Mira is a translator from Italian and French, specialised in journalism and non-fiction texts. Educated in the UK (BA Politics & Economics, St. Edmund Hall, Oxford), he has lived and worked in Italy, France and the UK. He currently lives in Cambridge. He has a Diploma in Translation (Italian to English) from the Chartered Institute of Linguists and is a member of the Society of Authors/Translators Association and English PEN. He translates texts from a range of industries, with fashion journalism his main focus. You can view his fashion translations on FashionNetwork.com. He has contributed to ‘In Other Words’, the journal of the British Centre for Literary Translation, and to London literary magazine Litro, where he also published a translation of an excerpt from Italian early XXth century author Gabriele D’Annunzio. When he is not translating, Nicola loves reading, writing and sports. He is the managing editor of sports statistics website Greatest Sporting Nation.
View all posts by Nicola Mira →
« The Killing of Bobbi Lomax – Cal Moriarty
Interview with Tom Bouman (author of ‘Dry Bones in the Valley’) »