This Is How It Ends – Eva Dolan

This Is How It Ends – Eva Dolan 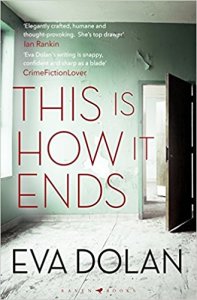 Eva Dolan is a stand-out in the new breed of British detective novelists for her refreshing take on the police procedural genre in the Zigic and Ferreira series.

In the three novels published so far, Dolan showed how, even in a setting that is not London, multi-culturalism, gender and social issues can be woven into arresting crime fiction. Her Fenland-based stories, featuring two cops in charge of the Peterborough Hate Crimes department, paint a picture of ‘provincial’ Britain that is a far cry from sleepy suburbia or cosy country squiredom, with the plus of extraordinarily clever, page-turner plots.

Besides the debut novel, ‘Long Way Home’, my favourite is the most recent, ‘After You Die’ (2016), longlisted for the CWA Gold Dagger and shortlisted for the Theakston’s Crime Novel of the Year, in which Dolan managed to add new depth to her protagonists – at least to gritty DS Mel Ferreira, a young women of Portuguese origin with enough punch and smarts for two of her male colleagues – and to spin an utterly brilliant whodunnit, leaving the killer’s identity well and truly secret until the very last.

‘This Is How It Ends’ is a new departure for Dolan, a stand-alone novel set in London, and right from the first page it’s obvious how she isn’t simply adapting an existing canon. Gone is the classic police procedural structure and, though there is a dead body in the first chapter, this novel is definitely more of a psychological thriller, if one needs to pigeonhole it.

‘This Is How It Ends’ is more ambitious than her previous works, in characterisation, plot structure and scope. Dolan works with a material which seems to have more depth, more volume, and she moulds and kneads it expertly, drawing unexpected nuances from it. Always with her signature clarity and sharpness of observation.

The story opens as young Ella Riordan appeals for help to her friend Molly Fader, both of them at a party organised by Ella to celebrate her latest book project. Molly finds Ella in an empty room, a dead man on the floor. She is dazed, stricken, and first claims she doesn’t know the man and had nothing to do with his violent death. After Molly teases something of an explanation from Ella – the man tried to rape her, she tried to evade, he fell, banged his head, died – they panic and decide to dispose of the body down the building’s unused lift chute.

One of the reasons they didn’t want to call the police is that both have a record, from their involvement in protest demonstrations turned out other than peaceful, and Ella was recently detained on suspicion of arson – at the premises of a London estate agent that attracted the attention of anti-gentrification activists – though she was later released.

Ella is heavily involved in the protests, fighting developers who are cajoling and/or coercing owners and tenants out of old London buildings, to renovate them at huge profit. In fact, the party in question was held in one of these buildings, Castle Rise, where Molly lives, to mark the success of a Kickstarter campaign to fund a book Ella is writing off her PhD work, an expose of unsavoury development practices and the political collusion that fosters them.

Ella and Molly are united by their civic convictions (and hatred of public authorities) but very different in age and background. Ella, in her late twenties, is a spirited Durhamite striving to make her mark as a civil rights activist, while Molly, in her early sixties, is an art teacher turned agitator and photographic chronicler, famously of the Greenham Common 1982 protests but of countless others too, including a recent one in Camden where she took a picture of Ella being clubbed by the police.

Their relationship is almost mother-daughter, with parental badgering and childish lying thrown in. But it’s also that of two partners in ‘crime’, of two friends, who are close enough to share details about their sex lives, and hide the body of a man who died violently, if presumably accidentally.

Dolan takes her time building the story, lining up its elements and slotting them into place, and in sketching the two women’s multi-layered relationship. Each scene is a carefully applied brush-stroke, each instance of omission by either Ella or Molly as painstakingly recorded as the respect Ella clearly has for Molly – it is through Molly’s old contacts that Ella is building her reputation as an activist.

Gradually, we learn of Ella’s wealthy, traditionalist family, her father a retired Police ACC, a man with savvy and clout who’d love to see her follow in his footsteps in the force. There is tension between Ella’s father and his daughter’s egalitarian streak, made worse as she becomes enmeshed, willingly enough actually, with Ryan Quinn, a dangerous agitator well-versed in orchestrating protests and fanning the flames of violence, who led, and was arrested and jailed for, the arson attack in which Ella took part.

Dolan gives us fully fledged characters and builds them up convincingly, though this inevitably slows down the story’s pace somewhat. The frequent back-and-forth in time, as we learn that Ella went to the Garton police academy, only to leave after being bullied and attacked by a fellow student, asks for a lot of attention on the part of the reader, especially those who may prefer a straightforward murder-investigation-red herrings-denouement kind of story.

‘This Is How It Ends’ is very different, in fact it’s in another league, both in plot and narrative terms. Dolan combines first (Molly’s) and third-person (Ella) narrative to skilful effect, paints fully three-dimensional characters out of Ella and Molly and the rest of the convincing cast, and recreates disturbingly well the pain and disruption the Castle Rise tenants go through as they face eviction.

As Dolan’s previous novels show, she isn’t shy in tackling some of the most disturbing issues of our times, from human trafficking and slave labour to disability and child abuse. In ‘This Is How It Ends’ she raises her game in this respect too, unflinchingly portraying the cultural and organisational shortcomings of the police force, and shooting unforgiving broadsides at unscrupulous metropolitan developers and their political connivers. Her critique is all the more effective as it’s couched in quality writing and balanced insights.

Above all, ‘This Is How It Ends’ is about exploitation, and not just the economic and social type, though both play major parts in the plot. Using those as a grim backdrop, Dolan zeroes in unerringly on individual, personal exploitation, the kind that lurks just beneath the veneer of every relationship in the novel: Molly and Ella, Ella and her occasional lover Dylan, Molly and her own occasional lover Callum, Ella and the tenants and homeowners she’s campaigning for.

Even when it’s innocent, almost involuntary, the exploitation of one another’s very human weaknesses is always there, in the small gestures as in the grander ones, all of them narrated by Dolan with a sharpness and directness which are the hallmarks of a remarkable authorial talent.
The story features other, darker kinds of exploitation, but they are best left for readers to discover, or be surprised by, as Dolan packs a dynamite load of surprise twists in the narrative, to the very end. A bitter end indeed, in-keeping with the bleakness of tone which pervades the novel, as is inevitable given the harshness of its underlying themes, but rendered with an abundance of authorial poise that bides well for Dolan’s future efforts, which we’re very much looking forward to.