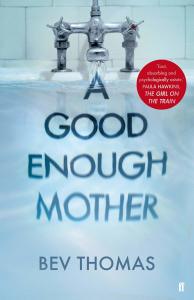 Bev Thomas’s debut novel, ‘A Good Enough Mother’, is a brilliant, genre-defying exploration of the complexities of motherhood, and of the constant conflict between reason and emotion. It tells the story of a respected psychologist who struggles, and fails, to keep her grief as the mother of a missing son at bay, until it collides tragically with her work and, crucially, with the lives of some of the people she is treating.

There are novels that interact with you at such a deep level that they leave you with more than the satisfaction of a good read. With questions, a heightened understanding of a theme, or maybe the need to learn more about it. ‘A Good Enough Mother’ is one of those novels for me. So eclectic that it won’t be pigeon-holed in a genre, it’s simply a great work of taut, engaging fiction.

The story is told from an original vantage point – the protagonist, Dr Ruth Hartland, the director of a specialist London centre catering for victims of mental trauma, is quite unique as far as fictional clinicians go – the plot is gripping, tension-filled but without hijacking the narrative, the writing is sharp, the characterisation first-rate. Thomas pens Ruth skilfully, observing with forensic precision how she struggles to cope with a young patient, Dan Griffin, who reminds her of her son Tom, an introverted youth who once attempted suicide, and then went missing about a year before the novel’s timeline starts, at the age of seventeen.

Despite Ruth’s experience as a psychologist and team leader, her yearning for and memories of Tom, sketched in flashbacks about Ruth’s life with now-estranged husband David and Carolyn, Tom’s twin sister, do interfere with Ruth’s ability to work. She is thrown by Dan’s physical similarity, real or perceived, with Tom, and struggles to work effectively with the young man, who comes to the centre following a rape attempt by a gang of youths, but in fact hides a dark secret.

Ruth is confident she can compartmentalise – she had even convinced her supervisor to hide Tom’s disappearance from the rest of her team. But she is wrong, and will be constantly thrown off-guard by Dan’s behaviour, unable to deal with his evasions and half-truths, eventually with catastrophic consequences.
Thomas deftly portrays the compassion Ruth puts in her work, her dedication a paradigm for the psychologists who seek to navigate on a daily basis the mazes in their patients’ disturbed minds – clinicians who are fallible human beings themselves, and of whom, sadly, there aren’t enough of, a point the novel makes very plainly. At the same time, Thomas unflinchingly unmasks Ruth’s uncertainties and fears, her hidden pain and her shame: that of a mother who blinded herself first to the reasons that made Tom’s adolescence and youth so different from that of his twin Carolyn (who, unlike him, is extroverted, focused and generally competent at life), and then failed to see how Tom’s disappearance, leaving his family ignorant as to whether he’s dead or alive, would affect Ruth’s ability to care for others professionally.

Ruth Hartland is truly a memorable character, though if one small criticism can be levelled at Thomas, it’s that the feeling I had in reading the novel, heightened by the first-person narration, is that it is mostly just about Ruth. The centre director, the therapist, the grieving mother. And more, but I won’t spoil some of the plot’s more unexpected twists. Some of the other characters in this brilliant novel, each potentially a match for Ruth and her foil Tom, like Dan for example, might have been given sharper relief, adding further heft to the story.
On the other hand, Ruth is indeed memorable, and the way her story is narrated, the insight Thomas puts in portraying her, left me with that yearning to learn more I mentioned at the outset: what is it that drives the choices, small and big, we make in life? How do we make sense of our subconscious, and of how it shapes our choices, sometimes blinding us to the obvious? There aren’t ready-made answers to such questions, and I admire Thomas’s honesty in not suggesting them. Portraying so skilfully the labyrinth that sometimes is hidden within a ‘normal’ person’s mind, especially one as well-adjusted on the surface as Ruth, is a feat in itself, and makes this a remarkable first novel. To write such a captivating, clever, compassionate story and to stimulate readers to even think of such questions, while keeping them entertained with a thrilling plot, is in my opinion the mark of an author with huge potential, one I very much look forward to reading again soon.

Nicola Mira is a translator from Italian and French, specialised in journalism and non-fiction texts. Educated in the UK (BA Politics & Economics, St. Edmund Hall, Oxford), he has lived and worked in Italy, France and the UK. He currently lives in Cambridge. He has a Diploma in Translation (Italian to English) from the Chartered Institute of Linguists and is a member of the Society of Authors/Translators Association and English PEN. He translates texts from a range of industries, with fashion journalism his main focus. You can view his fashion translations on FashionNetwork.com. He has contributed to ‘In Other Words’, the journal of the British Centre for Literary Translation, and to London literary magazine Litro, where he also published a translation of an excerpt from Italian early XXth century author Gabriele D’Annunzio. When he is not translating, Nicola loves reading, writing and sports. He is the managing editor of sports statistics website Greatest Sporting Nation.
View all posts by Nicola Mira →
« Before She Knew Him – Peter Swanson
Rafael Bernal – The Mongolian Conspiracy »