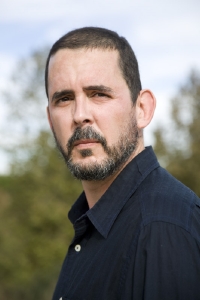 Author of Angel Baby (a finalist for the Hammett Prize, awarded by the International Association of Crime Writers), Richard Lange is the author we’re guesting today here at ThrillerBooksJournal.com. Enjoy the interview!

Q. Hi Richard, welcome. Our first question is very easy: who is Richard Lange as a person and as a writer?
A. As a person, Richard Lange is pretty boring. He spends a lot of time alone in a room staring at a blank page. As a writer, he’s a bad motherfucker who can knock the smile off your face with a single word and break your heart with a sentence. Watch out for him!

Q. Becoming a writer as always been a goal for you, or have you realized you wanted to write in a particular moment in your life?
A. I have been writing forever, since I was very young. Stories about World War I pilots in third grade, plays about vampires and time travel in fifth grade, a sci fi novel and zombie screenplay in high school. I got serious about writing and started sending out stories in college. It took me ten years after that to get one published and ten years after that to get my first book published.

Q. How was your novel Angel Baby born? Did anything in particular give you the idea?
A. The idea came from an article in the L.A. Times about an American guy who snuck people over the border for a Mexican pollero (smuggler). Five years later, when it was time to write my second novel, that guy became the basis for the character of Malone, and Angel Baby grew from there.

Q. Can you briefly summarize Angel Baby for our readers?
A. The book is a chase from Tijuana to L.A. A young Mexican woman named Luz leaves her drug lord husband and sets out on a journey to return to a 4-year-old daughter she left in Los Angeles. She meets an alcoholic smuggler with a death wish who helps her on her quest. She’s pursued by a scary gangster hired by her husband to catch her and a corrupt border cop who is after some money she stole from her husband when she made her escape.

Q. Has been Luz character based on someone you know?
A. Not really. I just wanted to write a tough chick, and she’s a tough chick.

Q. Are you already working on a new story?
A. I just finished the screenplay for Angel Baby for Warner Bros. Maybe someday they’ll make it. I have a new collection of short stories coming out in the U.S. in February 2015. It’s called Sweet Nothing. And I’m working on a new novel.

Q. A suggestion to wannabe writers. A suggestion to passionate readers.
A. For writers: Read, read, read. Write, write, write. Write stories, not blogs, diaries or Tweets. Learn to move an audience if you plan to write for a living. For readers: Read all my books, then buy copies of them for everyone you know.

Q. If you want to say anything, this is the moment…
A. Anything. There, I said it.

Q. Thanks for having accepted our invitation, Richard: it’s been a pleasure guesting you on our website.

I'm a reader, and a few years ago I published a book (an essay regarding Serial Killers Couples) as well as some short tales in anthologies and magazines. Since 2007 I run ThrillerCafe.it, leading Italian website coming to crime fiction. ThrillerBooksJournal.com is my mission to bring my passion to English speaking people.
View all posts by Giuseppe Pastore →
« Buried Angels – Camilla Lackberg
Missing You – Harlan Coben »