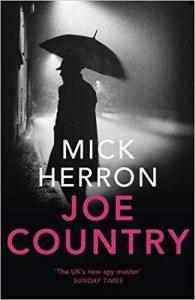 Among the many reputable writers who have taken up the gauntlet of writing spook thrillers in the post-Cold War era, Herron stands head and shoulders above the competition in my opinion for originality, acerbic wit and sheer writing talent. At the core of his stories is the infamous Slough House, an operational base as far removed from a Q-style secret intelligence hub as possible. Slough House is a dingy building in one of central London’s less salubrious corners, home to an obscure department led by former MI6 agent Jackson Lamb, who lords over it like an ageing, outmoded and down-at-heel circus ringmaster.

Slough House is home to a motley crew of ‘slow horses’ – MI5 operatives who have been relegated to Jackson Lamb’s unsavoury domain after committing sundry sackable offences for which the Service doesn’t even bother with an actual sacking, happy to simply ship off said horses to the farthest-flung, most arid pastures of its secretive empire.

The crew includes a borderline psychopath who hardly ever speaks, a young lady with a cocaine habit compounded by anger management issues, an IT wizard whose hacking skills are matched only by his complete failure to cotton on to the fact he’s a presumptuous misfit, a gritty young woman whose tenuous regard for her nose-diving intelligence career was ripped to shreds by the death in the line of duty of a colleague and lover, an earnest young man whose own career nose-dive was barely cushioned by the fact he’s the nephew of a former MI6 legend known as the OB (for Old Bastard), and who’s ready to flap his fledgling wings at any opportunity to play the real intelligence game, and a middle-aged former alcoholic, PA to a previous Service boss who suffered her booze-induced shortcomings precisely because she was seeing the world through the bottom of a bottle or ten, and failed to notice her boss was working for the Kremlin all the time. And the latest addition to the crew, an intelligence analyst caught with reams of underage porn on his Service laptop and promptly banished to Slough House.

The lord and master of Slough House, the belching, malodorous, socially most incorrect Jackson Lamb, of whom Herron quips that, while he may be willing to shake hands with the Devil, he might not be reciprocated, because even Satan has standards, was  once upon a time a joe in various treacherous countries the other side of the Wall, when spying was allegedly an ‘us whites’ vs ‘them blacks’ affair, though of course everyone turned out to be cloaked in every possible shade of grey. Lamb is still alive and kicking in the world of British intelligence because he has more dirt on anyone within the Service than anyone else, and no one is yet prepared to take him to task, or call his bluff. For all his character failings, Lamb is very clear about one thing though: no one messes with his joes, even if they’re slow horses.

So when Frank Harkness, a rogue former CIA operative who, in a previous Jackson Lamb novel, ‘Spook Street’, was spotted but alas not caught trying to stage a lethal intelligence coup  – lethal for Her Majesty’s innocent subjects and for one slow horse in particular – shows up uninvited at the Old Bastard’s funeral, and successfully evades capture by the OB’s nephew (who also happens to be Harkness’s son, but that’s another story), Lamb is not one to look the other way. Nor is he at all inclined to call on the resources of the Secret Service proper to track down Harkness, preferring instead to unleash his slow horses in pursuit of Harkness, out there in joe country.

A decision which readers of the series’ previous novels won’t be surprised at, though as usual Herron shuffles cleverly his vast cast of characters – including a sadly believable Boris Johnson spoof – and builds another remarkable tale of first-rate intrigue and second-rate, but no less heartfelt, intelligence work, as the slow horses find themselves enmeshed in the shadowy aftermath of a UK-engineered arms deal involving minor royalty in a sex-and-violence scandal – two grubby deals for the price of one in fact, which will lead to a dangerous game of cat and mouse between the slow horses and Harkness’s team in snow-bound Pembrokeshire, of all places.

As often happens with Herron, to begin with the plot staunchly refuses to pick up what would be a more canonical ‘Mission: Impossible’ speed. Herron’s narrative has the pace of a weaving slalom run rather than that of a reckless downhill race. Yet I found ‘Joe Country’ as irresistible as its predecessors for its peerless timing, the story leisurely enveloping the reader in its coils before giving a series of gut-wrenching squeezes, as some of the slow horses find themselves in dire trouble.

While Mick Herron’s intelligence heroes are consistently at the bottom of the pecking order when it comes to official recognition for services rendered, his novels have been sweeping up literary awards with equal consistency. The first novel in the Jackson Lamb series, ‘Slow Horses’, published in 2010, was  shortlisted for the CWA Steel Dagger, the second, ‘Dead Lions’, won the 2013 CWA Goldsboro Gold Dagger, and all the subsequent novels in the series were in turn nominated for at least one of the Gold and Steel Daggers, the Theakstons Crime Novel of the Year, and the Macavity Award. A critical success which Herron has replicated with his other, anything-but-conventional crime novels, my personal favourite being ‘Smokes and Whispers’ featuring redoubtable private eye Zoe Boehm.

‘Joe Country’ is a worthy addition to Herron’s collection of contemporary thriller gems, one in which he mines the rich narrative ore of the Jackson Lamb series, unearthing fresh connections between the characters and injecting new electricity into seemingly dormant ones – while making sure that new readers aren’t left in the dark.

Beneath Herron’s corrosive humour and wily irony, all may not be well in the world of British secret intelligence – in fact in the whole of the not very United Kingdom of Great Britain and Northern Ireland. Yet, so long as we can believe there are slow horses out there harnessed to Jackson Lamb’s rickety carriage, we can be sure that someone will try their damnedest to do the right thing – if not in the real world, then certainly in Mick Herron’s subtle, entertaining and fascinating fictional one.

Nicola Mira is a translator from Italian and French, specialised in journalism and non-fiction texts. Educated in the UK (BA Politics & Economics, St. Edmund Hall, Oxford), he has lived and worked in Italy, France and the UK. He currently lives in Cambridge. He has a Diploma in Translation (Italian to English) from the Chartered Institute of Linguists and is a member of the Society of Authors/Translators Association and English PEN. He translates texts from a range of industries, with fashion journalism his main focus. You can view his fashion translations on FashionNetwork.com. He has contributed to ‘In Other Words’, the journal of the British Centre for Literary Translation, and to London literary magazine Litro, where he also published a translation of an excerpt from Italian early XXth century author Gabriele D’Annunzio. When he is not translating, Nicola loves reading, writing and sports. He is the managing editor of sports statistics website Greatest Sporting Nation.
View all posts by Nicola Mira →
« Rafael Bernal – The Mongolian Conspiracy
A Stranger in My Grave – Margaret Millar »