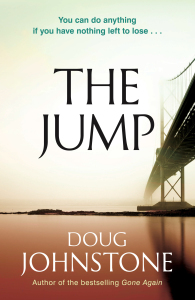 ‘The Jump’, Doug Johnstone’s sixth crime novel, tells the tale of a mother’s harrowing journey from her teenage son’s suicide into another family’s disturbing secrets. It’s a gripping read with skilfully portrayed protagonists, permeated by a powerful sense of place: the Firth of Forth and South Queensferry, where for all its industry and technology mankind hasn’t really subjugated  the brute force of The North Sea, savagely pounding against the outrageous daring of the Forth bridges.

Eleanor Napier, Ellie to her friends and the reader, is in her early forties and still going through the fathomless pains of losing her only child Logan. A quiet, seemingly ordinary teenager who unaccountably jumped off the Forth road bridge to die into the Firth’s frigid waters. Ellie’s an East Scotland girl, a keen swimmer who’s well-matched with husband Ben, an experienced sailor. They live an unglamorous life like plenty of their peers. Not exactly struggling to make ends meet, but not comfortably well-off either, both overqualified for the rather menial jobs they’re doing. But cheerfully getting on with it and enjoying their family life, until Logan jumps off the bridge, opening up a huge chasm in their lives.

On one of her manic daily trips up on the bridge, endlessly re-playing on her smartphone the surveillance video showing Logan jumping off, Ellie sees Sam, another youth on the brink, poised to plunge into oblivion from the same spot where her son did. She takes a chance and saves him, coaxing him away from the edge and bringing him home with her, a frightened boy with, she soon discovers, blood stains that are clearly not his own all over his hoodie . It’s a gesture that will change Ellie’s life forever, as Sam’s story gradually unfolds, and Ellie gets drawn into it, Johnstone cleverly rendering the combination of tenderness, altruism and the shadow of the lingering guilt about Logan’s suicide which makes Ellie reach out to Sam.

Sam’s is a dramatic story, and it makes the tension in the novel escalate. It’s strong from the start, as Johnstone peels away the fragile layers of Ellie’s personality in the wake of Logan’s death, and it fast becomes taut as a violin’s string, as Ellie walks to Sam’s home nearby  to find Jack McKenna,  Sam’s father, alone and semi-conscious, bleeding from a stab wound in the stomach. In a sliding-doors moment, before she can do anything for the wounded man, Ellie hears Sam’s mother come home and takes another chance. She leaves, unseen and undetected, leaving only her fingerprints on the door handle and, perhaps, a fleeting impression in Jack’s slipping mind.

Johnstone’s success is to build an unconventional crime novel, with no body-in-the-first-chapter and ensuing police investigation, using the brick and mortar of a clever psychological study of Ellie – with her sorrow, fear and yearning for a normal mother’s life – and of the shocking crime that bloodies Sam McKenna and his family, his father Jack, mother Alison and most of all his 12 year old sister Libby, for whom he’s incredibly protective.

As story materials go, these are tricky indeed. A lesser author may have foundered dealing with the psychological insights into the characters, or balancing the tension between Ellie’s past and her present, irresistibly slipping down a treacherous road as she puts herself on the line to save Sam and Libby. Johnstone instead does a great job, keeping Ellie’s motivations wholly believable, and making the reader empathise with this generous, feisty heroine. As well as keeping an unflagging pace as Ellie and Ben – for he had to be drawn in too – skirt with danger, even catastrophe, in their attempt to find a way out of the terrible web enmeshing the McKenna family.

The story works well to the dramatic end, in a satisfying mix of psychological thriller and pure crime novel which makes ‘The Jump’ a truly fine read. Well done Doug Johnstone for, once more, successfully treading new ground in urban crime  fiction, giving us a heroine both gritty and moving, and a clever psychological plot with a host of shocking surprises. With Scotland’s harsh realities and natural environment a very real presence, pervading the whole novel and giving it added interest and spice. 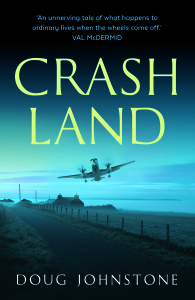