Only Killers and Thieves – Paul Howarth

Only Killers and Thieves – Paul Howarth 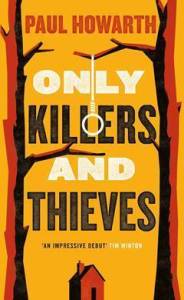 ‘Only Killers and Thieves’ by English-Australian author Paul Howarth is as good a debut novel as I’ve read in a long time. For its powerful sense of place – and an extraordinary place too, unforgiving but beautiful – its sophisticated characterisation, well-paced plot and, above all, for Howarth’s spare, intense writing, veined with strong echoes of Cormack McCarthy.

It is a tale of the wildest Australian outback, set at the tail end of the XIXth century, when the newly created nation was coming of age, and coming painfully to terms with tearing issues like a near-feudal system of land ownership, labour exploitation that often crossed the line into slavery and the merciless, systematic dispersal – a euphemism for mass murder – of Indigenous Australians, ‘blackfellas’ or blacks, as they were then called by their land’s new masters.

‘Only Killers and Thieves’ contains pain on a bewildering scale, the growing pains of Australia as a nation and civil society and those of Billy and Tommy McBride, the elder sons of impoverished farmer Ned McBride. A former stockman for wealthy landowner John Sullivan, McBride stubbornly ekes out a living with his family, which also comprises his wife Liza and younger child Mary, tending some land and cattle of his own. His selection, as the plots of land acquired by landowners were known, is much smaller than Sullivan’s, his cattle, cared for with the help of his teenage sons and his only two Indigenous helpers, a poor herd indeed, but McBride refuses the help Sullivan repeatedly offers.

Howarth describes the McBride family’s harsh but not unhappy existence through the eyes of Tommy, a teenage boy whose stubbornness, inherited from his father, is mellowed by his mother’s more sensitive yet practical outlook. A clever way of easing the reader into the story, hiding some of the painful facts of Ned McBride’s failures behind young Tommy’s naivety. Above all, a way of creating a memorable character in Tommy, whose violent, heart-wrenching transition into adulthood Howarth describes with deft, unflinching prose.
Howarth takes his time setting the scene at Glendale, Ned McBride’s farm. With bold, precise strokes, he gradually immerses the reader into a world where nature rules supreme, where men and women soldier on in the face of huge adversity (droughts, floods, famine and back-breaking work on cattle and land), urged forward as much by dreams as by practical needs. A world characterised by the harshness of Nature and the unforgiving and unforgivable violence of men, bent on destroying the indigenous population without realizing they are also destroying their own humanity.

It is a slow, assured build-up to the novel’s first dramatic twist, which comes when Billy and Tommy return home after a swim in a natural pool nearby, their first leisure after torrential rains finally come to relieve a long period of drought. They find Ned and Liza shot dead, Mary too shot but barely alive, their two blackfellas, faithful old Arthur and the younger Joseph, vanished.

Desperate, the two boys, or rather the older of them, Billy, decide to rush to John Sullivan’s lands with the dying Mary, rather than seek help from the nearby community of Bewley. One of the many life-defining choices they will have to make in the days that follow, which will leave an indelible mark on their young lives.

Sullivan offers to help, in his customary overbearing manner, always hinting at some hold he has on the McBride family through Ned. He and his young, city-born wife call a doctor for Mary, and Sullivan convinces the boys they need to set off immediately in pursuit of Arthur and Joseph, for surely the murders are their doing. Billy needs little convincing, but Tommy is against it at first. He’s distraught and confused, yet refuses to believe faithful Arthur, or even Joseph, could be the murderers. Eventually the issue is settled by the presence of the formidable, frightening Chief of the Native Police, Noone, and three of his men. Noone is white but his men are indigenous, a motley, fierce gang of blackfellas recruited to police – or rather hunt and ‘disperse’ – their own kind.

The hunting party, the two boys, Sullivan and his henchman Locke, and Noone and his gang, set off westwards across the desert and the scrubland, in their quest to avenge Ned and Liza McBride. It is a rough kind of justice that Noone promises, but justice nevertheless. A notion that Tommy will gradually, inevitably witness as being a shameful lie.

The hunt for the alleged murderers is a slow descent into hell for Tommy and Billy, another chapter in their violent coming-of-age. Howarth spares them, and the reader, no mercy. Nature and men, violent predators like Sullivan or the much more cunning, yet equally savage Noone, will plunge the two boys into a world where the strongest, or better armed, wins, where women are a disposable commodity, and where the indigenous people, of any age or sex, are prey to be caught and slaughtered in the name of a very dubious justice.

While Billy eventually comes to relish this hell, for the want of, or the refusal to think about, a better alternative, Tommy desperately holds out against it. If not in his actions, for he too is coerced into taking an active part in the dispersal, at least in his heart. He will never stop seeking, and hoping for, the truth about his family’s massacre, and for something that at least resembles justice.  A life-defining choice, whose consequences will haunt him forever.

‘Only Killers and Thieves’ is a stunning novel, lean yet grand in scale, violent and deeply touching at the same time. It contains many themes, most of them worthy of a separate narrative in their own right, yet it embraces them all in generous, cohesive fashion, as Howarth does a brilliant authorial job at striking the right balance between them. He never loses sight of the personal and the individual, but neatly slots each of his many, finely sketched characters within the huge leviathan that is the Central Queensland outback. And while Ned McBride, Billy, Noone and even Sullivan are compellingly drawn personae, it is Tommy who stands out, as he suffers through an astonishing ordeal while desperately clinging to his humanity, one of the most memorable characters you’re likely to encounter in a long time.

Nicola Mira is a translator from Italian and French, specialised in journalism and non-fiction texts. Educated in the UK (BA Politics & Economics, St. Edmund Hall, Oxford), he has lived and worked in Italy, France and the UK. He currently lives in Cambridge. He has a Diploma in Translation (Italian to English) from the Chartered Institute of Linguists and is a member of the Society of Authors/Translators Association and English PEN. He translates texts from a range of industries, with fashion journalism his main focus. You can view his fashion translations on FashionNetwork.com. He has contributed to ‘In Other Words’, the journal of the British Centre for Literary Translation, and to London literary magazine Litro, where he also published a translation of an excerpt from Italian early XXth century author Gabriele D’Annunzio. When he is not translating, Nicola loves reading, writing and sports. He is the managing editor of sports statistics website Greatest Sporting Nation.
View all posts by Nicola Mira →
« What You Want To See – Kristen Lepionka
Cold Desert Sky – Rod Reynolds »