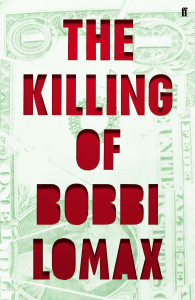 Hypnotism, antique books and coins, and nameless dealers. Forgery and a bankrupt property company that left thousands of angry investors in the lurch. Vicious local politics and a religious sect, the Faith, that’s one hundred and fifty years old, with a mafia-like hierarchy and a bigamist founder. Add three gruesome bombings with two dead and another victim in ICU and shake it all up somewhere in Idaho in the early 1980s.

Yes, ‘The Killing of Bobbi Lomax’, debut novel by Cal Moriarty, who worked as a private detective and graduated through the ranks of Faber & Faber’s writing academy, is different. A good kind of different, its fabric finely textured with wryly observed characters, and cleverly stitched together with an unusual but gripping converging timeline.

Cal Moriarty does anchor the story to a classic cop though. Marty Sinclair is a likable blend of laid-back acumen, perseverance and commitment. Moriarty endows him with enough initiative and nous to take on violent criminals, politicking superior officers and the clannish Faith leaders with ingenuity. He’s also a man with a sad past – a teenage daughter who’s disappeared – enough of it laid bare to make him a strong character without borrowing too much from the messed-up cop canon.

One of the hallmarks of a fine crime novel is how the villain or villains are portrayed. Here too Moriarty does a first rate job and it’d be remiss of me to spoil it for you. Let me just say that the author pulls off that most clever of tricks: to leave the villain in plain sight, developing him/her as a character fully while still keeping the reader guessing.

‘The Killing of Bobbi Lomax’ is an ambitious crime novel. The slowly converging timeline is occasionally baffling but on the whole well managed. And while the story’s milieu is quirky enough to feel idiosyncratic at times (it’s not often that in a crime novel you meet twin brothers collecting antique coins and documents, or a homeless man in a hut made of old books who acts as someone’s PA), the characters are realistic and  realised enough to make the story enjoyable.

And yes, Marty Sinclair and his chatty partner Al Alvarez do get through a lot of smart detective work while the unknown bomber goes about the un-merry business of causing havoc within the local community and the Faith. Smart work that will be justly rewarded, for their and the reader’s deserved satisfaction. Well done Cal Moriarty, for concocting a clever crime cocktail with so many unusual ingredients.

Nicola Mira is a translator from Italian and French, specialised in journalism and non-fiction texts. Educated in the UK (BA Politics & Economics, St. Edmund Hall, Oxford), he has lived and worked in Italy, France and the UK. He currently lives in Cambridge. He has a Diploma in Translation (Italian to English) from the Chartered Institute of Linguists and is a member of the Society of Authors/Translators Association and English PEN. He translates texts from a range of industries, with fashion journalism his main focus. You can view his fashion translations on FashionNetwork.com. He has contributed to ‘In Other Words’, the journal of the British Centre for Literary Translation, and to London literary magazine Litro, where he also published a translation of an excerpt from Italian early XXth century author Gabriele D’Annunzio. When he is not translating, Nicola loves reading, writing and sports. He is the managing editor of sports statistics website Greatest Sporting Nation.
View all posts by Nicola Mira →
« Arab Jazz – Karim Miské
Camille – Pierre Lemaitre »