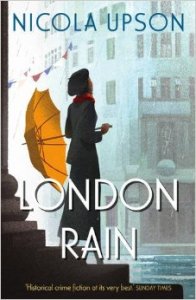 ‘London Rain’ is the  seventh instalment in the series Nicola Upson has created featuring the crime fiction author Josephine Tey. In real life Tey was a prolific writer both before and after World War 2, and Upson takes full advantage of her character’s interesting circumstances to devise crime novels that are both fascinating for the skilfully-rendered period details and absorbing for their portrayal of crime and justice in Britain in the inter-war years.

In ‘London Rain’ Upson plays a very clever hand. She sets the story at the time of the lavish coronation of King George VIth, upstaging some of the current conventions of the genre while delivering a thrilling and highly original mystery.

Inverness-based Josephine Tey is in London to oversee a BBC radio production of one of her plays and to enjoy the coronation, as well as the company of her lover Marta – their intense relationship is adroitly woven by Upson into the main narrative. At the height of the celebrations on Coronation Day, DCI Archie Penrose, a close friend of Tey, is called to investigate the murder of Albert Beresford, one of the BBC’s best-loved broadcasters. A second murder victim, Millicent Gray, Beresford’s mistress and the lead actress in Tey’s play, seems clearly connected to Beresford’s death and Penrose’s job is apparently straightforward. The more so as the BBC top management is putting not-so-subtle pressure on Scotland Yard to charge the person they have apprehended for both murders and close the affair swiftly and discreetly.

Upson upstages crime fiction conventions in more ways than one. By delaying presenting us with a murder victim until the end of chapter 6. By lingering with obvious pleasure on the Coronation pageantry and on the politics and gossip at Broadcasting House, both described with a wealth of cleverly-conveyed detail. But chiefly, by plainly showing the reader who kills Albert Beresford. So plainly in fact that I will be spoiling very little by revealing that it is Beresford’s wife Vivienne, herself an editor for the BBC’s Radio Times, a woman Tey meets in distressing circumstances at Broadcasting House and for whom she feels an immediate sympathy.

Vivienne has killed Beresford, no doubt about it, and she may well have killed Millicent Gray too. The nation’s broadcaster and the high echelons of Scotland Yard are keen to see Vivienne hanging for both crimes. But Tey and Penrose have doubts about this. Tey feels a kinship of sorts for melancholy, intelligent Vivienne, and cannot resist probing into the affair. To her credit, Upson avoids casting Tey as the classic period amateur sleuth. Rather than through some abstract compulsion in or hobby for crime-solving, Tey will become deeply involved in the affair owing to her sympathy for Vivienne, whom she visits in Holloway prison, the ensuing conversations being among the most poignant and absorbing scenes in the novel.

It is in rendering her characters’ psychological nuances that Upson really comes into her own. In the lead-up to the first murder she sketches the personalities not just of Josephine Tey, independent, curious and compassionate, but also of the other lead players: unfussy, professional and sad Vivienne Beresford and resolute, well-connected DCI Penrose, a strong man who’s deceivingly charming as well as being warmly affectionate towards Tey. There are others too, for Upson doesn’t stint on her cast, and I would be spoiling it for readers if I mentioned them and expanded on the plot. Suffice to say that Tey will discover unexpected links between these deaths and tragic events that took place ten years earlier and which involve all the main characters, sometimes in totally unexpected circumstances. Another fine trick Upson plays is that, for the depth of the insights she gives readers on her characters, she still manages to leave concealed areas that are entirely believable and make for truly surprising twists in the story.

But what I most appreciated in ‘London Rain’ is the balance between  historical detail and crime investigation, and between psychological insight and action. The latter is more Sherlock Holmes than James Bond, and enthusiasts of fast-paced plots may not appreciate some of Upson’s psychological detours, but the fact remains that ‘London Rain’ works very well as a novel – crime or otherwise – precisely because of the fine balance the author achieves in all its components. This harmony is enhanced by Upson’s sober, engaging prose, which brings a period feel to the language without sounding contrived or getting in the way of the narrative flow.

No mean feat, considering the ambitious scope of the story and the richness of the characters, for which I look forward to further instalments in this excellent series. 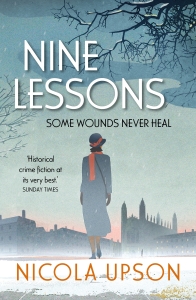 Nicola Mira is a translator from Italian and French, specialised in journalism and non-fiction texts. Educated in the UK (BA Politics & Economics, St. Edmund Hall, Oxford), he has lived and worked in Italy, France and the UK. He currently lives in Cambridge. He has a Diploma in Translation (Italian to English) from the Chartered Institute of Linguists and is a member of the Society of Authors/Translators Association and English PEN. He translates texts from a range of industries, with fashion journalism his main focus. You can view his fashion translations on FashionNetwork.com. He has contributed to ‘In Other Words’, the journal of the British Centre for Literary Translation, and to London literary magazine Litro, where he also published a translation of an excerpt from Italian early XXth century author Gabriele D’Annunzio. When he is not translating, Nicola loves reading, writing and sports. He is the managing editor of sports statistics website Greatest Sporting Nation.
View all posts by Nicola Mira →
« Someone Else’s Conflict – Alison Layland
Interview with Alison Layland (author of ‘Someone Else’s Conflict’) »