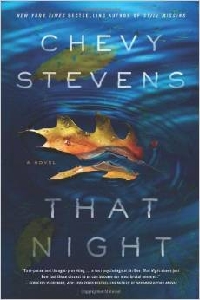 ‘That Night’ is the fourth thriller written by Chevy Stevens. Born on a ranch in Vancouver Island, Canada, the former realtor drew from her work experience to create the tense atmosphere and gripping plot of ‘Still Missing’, her successful first novel. In her latest work, Stevens ventures into uncharted but potentially very interesting territory: 34 year old Toni is being released from Rockland Penitentiary in Vancouver after serving an 18 years sentence for the murder of her younger sister… a murder the reader is told she didn’t commit.

Stevens paints the intriguing picture of a diminutive but tough-as-steel woman with a lost youth, a lost love – Toni’s boyfriend Ryan was her presumed partner in crime and as a result received a lengthy sentence too – and plenty of rage and grief still to process.

But before we discover how Toni will process the grief, come to terms with life on the outside again and try to unravel the mystery of her much-loved younger sister’s death, we are treated to long interludes of the lead-up to Nicole’s death. It’s Orange County and Jersey Shore with a Canadian outdoors/grunge setting, and though entertaining at first, it soon starts to wear thin. Stevens takes us through Toni’s very normal high-school life in back-of-beyond Campbell River: a control-freak mother, a too-lenient father, dating the high school’s most popular guy, teenage booze and sex, frequent run-ins with her teachers and with Shauna, the school’s alpha-girl, and her gang of sycophants.

Stevens writes smoothly and is adroit at describing the family dynamics in Toni’s life, but my feeling is that, though functional to the plot, the Campbell River sections slow down the action excessively. And they distract readers from the gritty portrayal of life in Rockland Penitentiary. The challenges and misery, the petty compromises and the physical and mental violence Toni has to put up with to survive. With the added perspective of how Nicole’s death and their daughter’s imprisonment wreak havoc on Toni’s parent’s marriage and business. What I imagine most crime-fiction readers are looking for comes, unfortunately, only much later: the skilful peeling away of the layers of mystery Stevens has cloaked Nicole’s death with.

‘That Night’ could function better as a roman noir in the French tradition, given that it stops far short of being a classic whodunnit. Instead it chooses to be a rather unresolved mixture of teenage TV serial and coming-of-age behind bars, and for this I think it suffers. Chevy Stevens remains an inventive crime writer who isn’t afraid of making bold plot choices, and I hope to see her in better form in the future.

Nicola Mira is a translator from Italian and French, specialised in journalism and non-fiction texts. Educated in the UK (BA Politics & Economics, St. Edmund Hall, Oxford), he has lived and worked in Italy, France and the UK. He currently lives in Cambridge. He has a Diploma in Translation (Italian to English) from the Chartered Institute of Linguists and is a member of the Society of Authors/Translators Association and English PEN. He translates texts from a range of industries, with fashion journalism his main focus. You can view his fashion translations on FashionNetwork.com. He has contributed to ‘In Other Words’, the journal of the British Centre for Literary Translation, and to London literary magazine Litro, where he also published a translation of an excerpt from Italian early XXth century author Gabriele D’Annunzio. When he is not translating, Nicola loves reading, writing and sports. He is the managing editor of sports statistics website Greatest Sporting Nation.
View all posts by Nicola Mira →
« RoseBlood – Paul Doherty
Crime fiction blogs worth investigating (part 5) »