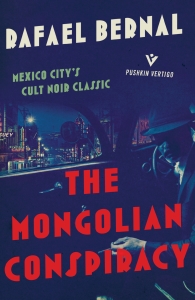 Mexico City, the late 1960s: the capital of a formally democratic state still relying on the military for ‘legitimacy’, a sprawling metropolis and a melting-pot community that isn’t far from one of the political hotspots of the time, as reverberations of the Cuban crisis, which threatened the international power balance between the USA, Russia and China, ripple out into Mexico too. This is the scene of Rafael Bernal‘s original spy thriller, ‘The Mongolian Conspiracy’, translated by Katherine Silver, which kicks off as the Mexican intelligence service tries to nip in the bud a rumoured plot to murder the US President on a visit to Mexico City.
Enter the local 007, and a far cry from James Bond he is. Filiberto García is almost sixty, a cynical, cunning government hitman with a long history of looking after the interests of whichever junta is ruling at any given time. And a long history of dead bodies, of ‘stiffs’ as he calls them, he is trying, unsuccessfully, to forget. García is lonely, a tad vain, unfailingly chauvinistic towards women, foul-mouthed and totally professional about his job. He just whacks (his own words again) whoever he’s ordered to, no qualms about it.

García’s latest assignment, for which he’s briefed by his boss, the Colonel, and a high-ranking government minister, is to get to the bottom of the rumoured US President assassination attempt, and stop it by whatever means he deems necessary. Because the rumour was passed on by the KGB, García will team up with a Russian operative, the deceptively suave Laski, and with an FBI man, Graves, who will look after US interests.  And because the rumour also involves a vast amount of dollars coming from Hong Kong, and García is known to be familiar with Mexico City’s Chinatown, especially the local opium dens, that’s where the investigation will start from.
As is made abundantly clear to the readers from page one, García and the likes of James Bond are colleagues as far as their job description goes, but polar opposites as to how they operate. García begins his investigation in a seedy tequila cantina and goes sniffing around Chinatown’s shops and opium smokers’ haunts. His quest unleashes a spectacular chain of violence, with a body count in the double figures, mostly killed by García himself, as the plot becomes more intricate by the minute.
I confess that I was initially uncertain whether the story really worked: it’s so over the top and socially and gender incorrect at times, or at least García initially seems to be, that I had my qualms. But the novel does work, in no small measure thanks to Bernal’s sharp, effective prose, and I was eventually hooked on its sharp mixture of violence and introspection, of animal cunning and razor-sharp insights, of dime-a-dozen minor characters and a handful of genuinely well-portrayed ones.

As Bernal introduces fresh layers to the plot, García emerges as an equally layered character, with a well-cached core of something akin to humanity that, once shorn of his most melodramatic soul-searchings, is quite captivating. His is an unglamorous life, with none of the supercars, luxury hotels and beautiful women that pop up in some spy stories. He lives in an ordinary flat, alone, and his closest friend is a former lawyer who drinks himself to oblivion with tequila each and every day. García is lonely, but has learned to find some solace in his work. Only some, since the memories of his killings are lodged deep within him – though he is honest enough to concede that he still has it far better than his victims, and those who loved them.

García throws himself with gusto into the investigation, sparring with his foreign colleagues, following his instinct and tapping his contacts in Chinatown. The rumour about the US President’s murder plot may or may not be true, but there is clearly something dangerous brewing in the city, and García twice has to evade assassination attempts by foes who seem to know in advance his next moves. Some of them are Mexican, others are Chinese. Inscrutable men who hide vast sums of suspiciously sourced money behind legitimate businesses. And they aren’t just men: a young woman, Marta Fong, who works for Liu, a Chinatown shop owner García is looking into, tells him she wants to run away from Liu, for whom she was more than a simple shop assistant, having been forced to become his mistress. García, against his instincts, decides to offer shelter to Marta, who may or may not be party to the President’s assassination conspiracy and, again against his instincts, falls in love for her – cue for more soul-searching on García’s part, and more than a little melodrama to add to the investigation’s drama.

Once more though, Bernal strikes the right note: García is clearly aware of the contradiction between his cavalier, to put it mildly, attitude to women in general, and his growing respect and affection for Marta. By constantly switching the narrative voice from the third person to Garcia’s first-person narration, Bernal exposes Garcia’s fears, weaknesses and above all resentment for his choice – perhaps choice isn’t quite the right word – of career.

Gradually, Bernal makes the readers understand that Garcia’s penchant for self-deprecation isn’t a melodramatic affectation, but something more genuine, that comes from the heart. A dark heart, but a heart nonetheless, one that undeniably shares the same weaknesses and aspirations of all the ‘other’ people, whose day job isn’t to murder supposed enemies for the sake of national security.

A relevant insight in this day and age, when ‘national security’ risks becoming a catch-all label for a variety of institutional sins.  In addition to the sheer entertainment of a cleverly worked out plot, through García, Bernal gives readers a glimpse of the tensions between who gives orders and who executes them when ‘national security’ is at stake. And of how violence always reaps a grim, unacceptable reward, on all parties concerned. Bernal is very clear about this, even when apparently revelling in the violence that is the standard, tragic fare of García’s life. Because of this, ‘The Mongolian Conspiracy’ will perhaps polarise readers in terms of their appreciation, but there is undeniably much more to it than what it seems to offer on the surface, and I found it a worthy addition to Pushkin Press’s Vertigo imprint of highly original period thrillers.

Nicola Mira is a translator from Italian and French, specialised in journalism and non-fiction texts. Educated in the UK (BA Politics & Economics, St. Edmund Hall, Oxford), he has lived and worked in Italy, France and the UK. He currently lives in Cambridge. He has a Diploma in Translation (Italian to English) from the Chartered Institute of Linguists and is a member of the Society of Authors/Translators Association and English PEN. He translates texts from a range of industries, with fashion journalism his main focus. You can view his fashion translations on FashionNetwork.com. He has contributed to ‘In Other Words’, the journal of the British Centre for Literary Translation, and to London literary magazine Litro, where he also published a translation of an excerpt from Italian early XXth century author Gabriele D’Annunzio. When he is not translating, Nicola loves reading, writing and sports. He is the managing editor of sports statistics website Greatest Sporting Nation.
View all posts by Nicola Mira →
« A Good Enough Mother – Bev Thomas
Joe Country – Mick Herron »