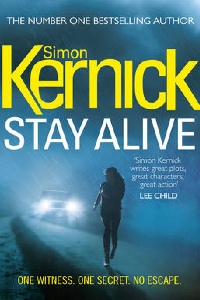 Stay Alive is a breathless, race-against-time thriller best avoided by those of a nervous disposition – or those who can only spare the odd ten minutes to read.  This novel is almost literally impossible to put down.
One witness: you’re on a trip with your family, miles from anywhere. A shot rings out – and your whole life changes in an instant.
One secret: a woman is racing towards you, chased by three gunmen. Although you don’t know it, she harbours a deadly secret. She’s in terrible danger. And now you are too.
No escape: you’re running, terrified, desperate to find safety. You know that the men hunting you have killed before. And if they catch you, you’ll be next…

Simon Kernick seeks real authenticity in his novels and often talks (both on, and off, the record) to real detectives, including the Metropolitan Police Special Branch, SOCA (Britain’s Serious and Organised Crime Agency) and the Anti-Terrorist Branch.  He doesn’t make guesses about what goes on in underworld dark alleys and behind closed doors – he hears it first hand.
That said, it’s important to point out that this is fiction, given that his first novel, The Business of Dying, is the story Dennis Milne, a corrupt London cop who earns a bit of cash-in-hand as a hitman!

His books have earned rave reviews from quality and tabloid press alike in Britain, and in the US he’s been twice shortlisted for the prestigious Barry Award for best British novel.
If you’re looking for excitement, Kernick comes recommended. Treat yourself. You know you want to…

My name is Linsey and I love crime fiction. The rebel in me likes to see rules broken, and the mother in me feels a need to see order restored - perhaps it’s a Freudian thing. I love the dark introspection of Scandinavian crime fiction; the beauty and cruelty of the Italian giallo and a nice big slice of US hard-boiled psychological thriller. As soon as I decide where I’m going on holiday, I’ll find a fictional detective who lives there – yes, I want to see the sites, but I also want to read the underbelly. That’s what’s so great about crime fiction. I’m a freelance writer, based in Manchester England; a city with a few crime writers of its own. If you’re planning a holiday here, look up Cath Staincliffe, Val McDermid, Chris Simms, Bill Rogers and others. And if you need a writer, take a look at my website – but I’m not showing you my underbelly.
View all posts by Linsey Parkinson →
« A Song for The Dying – Stuart MacBride
The Tournament – Matthew Reilly »