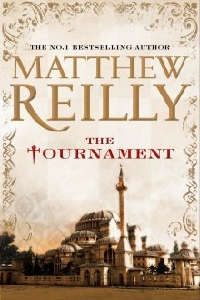 Something a bit different this time, as the thriller genre moves to sixteenth-century Istanbul. There’s a killer on the loose and a cardinal has been found mutilated in the grounds of the Sultan’s palace.

Suleiman the Magnificent has invited every king in Europe to send his best chess player to take part in a spectacular chess tournament. Roger Ascham has travelled to the Ottoman capital as champion of the English. With him, his protégé, a young Princess Elizabeth (later to become Elizabeth I of England), whom he wants to protect from domestic conspiracies as the struggle for the English throne puts her at risk.

Now it seems, the Sultan needs help to track down a murderer. Ascham and Princess Bess suddenly find themselves in terrible danger, needing all of Ascham’s intellectual powers to bring a killer to justice.

The Tournament is Reilly’s twelfth novel and something of a departure from his previous eleven. He’s much better known as the creator of US Marine Shane Schofield, action hero of the Scarecrow series. He’s also the man behind Jack West Jr, the Australian Outback military adventurer / archeologist with a bionic arm, who sounds like he’s just smashed his way out of an Xbox game.

After widespread rejection of his first novel, Contest, Matthew Reilly used his own money to self-publish.  He then persuaded a Sydney bookstore to put the book on its shelves. It sold out of course, Pan MacMillan picked him up and his next novel, Ice Station, was an international best-seller. Matthew Reilly is an example to every would-be writer to believe in yourself and your ideas: as the man himself says “The only limit is the limit of your imagination!”

Oh, and if you do have a bionic arm, don’t be afraid to use it.

My name is Linsey and I love crime fiction. The rebel in me likes to see rules broken, and the mother in me feels a need to see order restored - perhaps it’s a Freudian thing. I love the dark introspection of Scandinavian crime fiction; the beauty and cruelty of the Italian giallo and a nice big slice of US hard-boiled psychological thriller. As soon as I decide where I’m going on holiday, I’ll find a fictional detective who lives there – yes, I want to see the sites, but I also want to read the underbelly. That’s what’s so great about crime fiction. I’m a freelance writer, based in Manchester England; a city with a few crime writers of its own. If you’re planning a holiday here, look up Cath Staincliffe, Val McDermid, Chris Simms, Bill Rogers and others. And if you need a writer, take a look at my website – but I’m not showing you my underbelly.
View all posts by Linsey Parkinson →
« Stay Alive – Simon Kernick
Ripper – Isabel Allende »