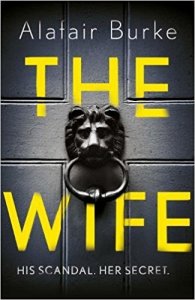 US author Alafair Burke, a former prosecutor who now teaches criminal law, has ten crime novels under her belt. Some are of the serial variety, featuring Assistant District Attorney Samantha Kincaid or NYPD Detective Ellie Hatcher, and others are stand-alone ones, like ‘The Ex’, nominated last year for the Edgar Award for Best Novel.

Burke’s latest, ‘The Wife’, another stand-alone novel, is truly top-notch, with echoes of established legal thriller authors like Scott Turow and of contemporary crime writers like Gillian Flynn and Peter Swanson. ‘The Wife’ is a clever distillation of the themes Burke has shown she is so adroit at handling in her previous works, from its sharp legal angle to the police procedural dynamics it contains, and, above all, it’s a gem for Burke’s subtle characterisation of both victims and villains.

Jason Powell, a prominent professor, ethical economist, successful author and liberal figurehead with perhaps a political career in the offing, is accused of impropriety of a sexual nature by Rachel Sutton, an intern at his consultancy firm. Like his wife Angela, as a reader I wasn’t at first quite able to fathom how much truth there was in the allegation: with hindsight, Burke is devilishly clever at making both Rachel’s and Jason’s account of the incident appear blurry at best, and at hinting that both may not be entirely reliable. Perhaps because of this vagueness, I confess I initially failed to engage with either character, to the point that I wondered whether I could be truly hooked by the story.

How wrong I was!  Gradually, irresistibly, Burke lures the reader deeper into the story, enmeshing them within a truly superior plot by unpeeling it layer by delicious layer, each revealing a new depth to her characters and their stories.

The tale of Angela Powell, née Mullen, Jason’s wife and the first-person narrator for much of the novel, is on the surface a pretty conventional one: a middle-class girl from East Hampton with a wild streak who marries a bright, up-and-coming New York academic, a considerate husband and caring father to her young son, and soars from hard-working, self-employed caterer to privileged Manhattan wife. But there’s a tragedy in her past, one which Burke reveals with tantalising caginess.

At the age of sixteen, Angela was abducted and held captive by a man she met by chance, and was eventually saved by the police only after a dramatic chase and shoot-out three years later. The abductor, Charles Franklin, died in the shoot-out, and Angela returned to her parents with a baby boy, Spencer, to begin the painful process of raising him while shouldering the horrendous burden of having been the victim of such a hideous crime.

I should perhaps stop here. ‘The Wife’ is one of those novels which is nearly impossible to review in any detail, as the plot is so labyrinthine and subtly layered – yet so sharply narrated – that it’s very hard not to spoil the huge array of surprises Burke manages to pack into it.

I will only add that, in the wake of Rachel Sutton’s accusation against Jason Powell, who in talking to Angela brushes everything off as a misunderstanding, another woman comes forward and accuses Powell of rape. Kerry Lynch is a senior marketing executive in a company Powell is consulting for, and the charges she files against him with the NYPD are rather more serious than Rachel’s.

The new accusation rocks Angela’s fragile world: not only her trust in her husband, and the entire fabric of her family life, are threatened, but her own past could be brought to the fore in the judicial battle that looms – not to mention the police investigation into the charges against Jason. Angela has worked incredibly hard to piece back her life after her abduction, stubbornly keeping its details, and those of Spencer’s babyhood, as deeply concealed as possible, and Jason’s misdemeanours risk blowing everything wide open.

I may have been slow to warm to the story, but once I began to realise its subtlety I truly fell for it, hook, line and sinker. The plot is brilliantly conceived and timed to perfection, with a clever interplay between Angela’s first-person narration and the third-person account of the efforts of NYPD detective Corrine Duncan, who’s called in to investigate Rachel Sutton’s claims. But ‘The Wife’ truly stands out for Burke’s portrayal of the victims that the crimes described in the novel leave in their wake.

Burke is alert to the smallest psychological nuances, and uses pinpoint-accurate brushstrokes to paint the picture of what it feels like to be a woman and a victim when dealing with a rape’s fallout. She does so not only by showing us the world through her victims’ eyes, but by mercilessly exposing the failures of those who come in contact with the victims: from law-enforcement authorities who are lazy in addressing their accusations, to the DA’s office and its need to play the acquittal vs conviction percentages in pursuing the cases (Burke’s portrayal of ADA King, of the Special Victims Bureau, whose pursuit of Rachel’s claim is blighted by his superior’s need to win the case, is another of the story’s triumphs), to the victims’ friends and relatives and their feelings, not to mention colleagues and the media.

They are large and small, these failures, and Burke calibrates their impact on the victims with compassion and a remarkable degree of equanimity. She shies away both from being merely sanctimonious and from turning the victims’ feelings into another plot device.

The humanity with which Burke portrays the effects of the crimes she narrates on Angela, Rachel, Kerry and even Spencer, are as worthy of the reader’s interest as the crime-fiction plot elements themselves.

‘What does it mean to know something?’ is the anguished question Angela asks herself two thirds of the way into the story, as Jason’s behaviour comes increasingly under police scrutiny and her family life is falling apart. It isn’t a philosophical question but a harrowing plead, touching on themes which go beyond the crime fiction remit, and adding to the depth which Burke gives to her story.

She handles seamlessly a novel with multiple narrative angles and a layered time structure – time, both in terms of how the past affects present and future, and of how its passing changes the characters’ perspective, is a strong presence in the novel. You can’t escape your past but you can try to improve the future.

Ultimately, it’s the novel’s characters who are memorable. Besides Angela, Detective Corrine Duncan is another winner. Dedicated and insightful, she embodies the humanity I referred to earlier. And while ‘The Wife’ is relatively thin on police procedural content, Duncan’s investigative nose and subtlety make her a worthy candidate for a role in future novels. I for one am already looking forward to reading Burke’s next! 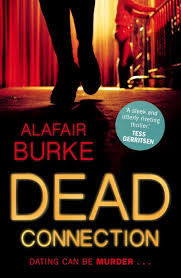 Nicola Mira is a translator from Italian and French, specialised in journalism and non-fiction texts. Educated in the UK (BA Politics & Economics, St. Edmund Hall, Oxford), he has lived and worked in Italy, France and the UK. He currently lives in Cambridge. He has a Diploma in Translation (Italian to English) from the Chartered Institute of Linguists and is a member of the Society of Authors/Translators Association and English PEN. He translates texts from a range of industries, with fashion journalism his main focus. You can view his fashion translations on FashionNetwork.com. He has contributed to ‘In Other Words’, the journal of the British Centre for Literary Translation, and to London literary magazine Litro, where he also published a translation of an excerpt from Italian early XXth century author Gabriele D’Annunzio. When he is not translating, Nicola loves reading, writing and sports. He is the managing editor of sports statistics website Greatest Sporting Nation.
View all posts by Nicola Mira →
« Interview with Tim Baker, author of ‘City Without Stars’
The Execution of Justice – Friedrich Dürrenmatt »