The Wolf in Winter – John Connolly

The Wolf in Winter – John Connolly 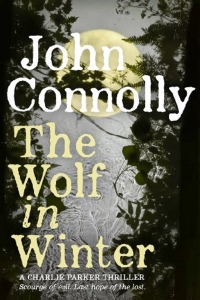 If there’s one thing I love, it’s an investigator with baggage – and Charlie Parker has plenty. Tormented and angry after the murder of his wife and daughter, Parker is driven to expose secrets and hidden truths like no-one else.  The Wolf in Winter, by John Connolly, sees him arrive in Prosperous, Maine.

As its name would suggest, Prosperous is a thriving community: thriving against the odds.  It looks after its own and rejects outsiders; its people are rich, confident and secure.

Suddenly, all is not well in Prosperous.  A homeless man is dead and his daughter is missing. When Charlie Parker arrives in town, his unerring sense of justice and desire for the truth lead the people of Prosperous to conclude that he is the real threat to their peace and security. Meanwhile, at the heart of the community lie the ruins of an ancient church, transported stone by stone, from England. Neither the ruins, nor the people of Prosperous are going to give their secrets up easily.

This is Dubliner John Connolly’s twelfth Charlie Parker novel: the first was Every Dead Thing (1999). He’s been a fixture on the Sunday Times bestseller list ever since. Every Dead Thing won the US Shamus award and earned Connolly the distinction of being the first non-American author to do so. He is also the creator of a series of ghost stories; The Book of Lost Things, a novel about fairy stories and power of books; and The Gates and Hell’s Bells (aka The Infernals), two novels for young adults.  He studied English at Trinity College, Dublin and is a regular contributor for The Irish Times. He divides his time between his home city of Dublin and America.

My name is Linsey and I love crime fiction. The rebel in me likes to see rules broken, and the mother in me feels a need to see order restored - perhaps it’s a Freudian thing. I love the dark introspection of Scandinavian crime fiction; the beauty and cruelty of the Italian giallo and a nice big slice of US hard-boiled psychological thriller. As soon as I decide where I’m going on holiday, I’ll find a fictional detective who lives there – yes, I want to see the sites, but I also want to read the underbelly. That’s what’s so great about crime fiction. I’m a freelance writer, based in Manchester England; a city with a few crime writers of its own. If you’re planning a holiday here, look up Cath Staincliffe, Val McDermid, Chris Simms, Bill Rogers and others. And if you need a writer, take a look at my website – but I’m not showing you my underbelly.
View all posts by Linsey Parkinson →
« Stone Cold – CJ Box
Interview with Luca Veste (author of Dead gone) »