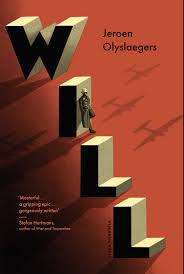 Wilfried Wills, the protagonist of ‘Will’, a historical thriller by contemporary Belgian author Jeroen Olyslaegers, translated by David Colmer, is in his nineties, and is writing his memoir. He does ramble on, occasionally skipping backwards and forwards in time, mentioning dead friends and past events as though the former were still alive, and the latter had only just happened. Understandable, given his age, and also given the harrowing nature of some of the events he recounts to his great-grandson, the intended recipient of his tale.

Wilfried was 21 in February 1941, when he started out as a lowly beat cop in Nazi-occupied Antwerp, the Belgian city and international hub of the diamond trade. Policing was a job for him, not a mission: Wilfried was just another young man with not many options available in a country that had been too easily and comprehensively taken over by the Wehrmacht, and was being suffocated by the Sicherheitsdiesnt and humiliated by the Gestapo.

Wilfried was a willing recruit and a not entirely naïve young man, but what he had to live through in the war years would mark his life indelibly. He talks to his great-grandson, and his readers, almost hesitantly at first, as he looks back to his younger self in something akin to wonderment. He is a voluble narrator, quick-witted and ironic, sometimes verbose and a touch melodramatic, other times almost coy and guarded. He is also angry, and sad, sentiments mirrored in the juxtaposition between his yearning to unburden himself and the shame which runs through his account like a venomous seam.

To begin with, there isn’t a genuine plot to the story, no more than there could be in an old man’s disjointed ramblings. Yet Olyslaegers imperceptibly, gradually tautens the storyline’s strings, ratcheting up the tension, as the Nazi occupiers tighten their own grip on Antwerp, inexorably snuffing out its inhabitants’ freedom and their humanity with it. They begin of course with the Jewish element in the population, but what they and their Belgian collaborators will do to the Jews will affect everyone, as Wilfried is painfully, at times reluctantly telling us.

By coincidence, I’ve been reading ‘Will’ at the same time as another novel set in the same period. ‘Kaputt’, by Italian journalist and author Curzio Malaparte, was written in 1943, and is a semi-fictionalised account of Malaparte’s first-hand experience of WW2 in Croatia, the Ukraine, Romania and Finland, as he followed the marauding path of the German army. Written in idiosyncratic, almost flamboyant style, Malaparte’s account is chillingly hyper-realistic, where ‘Will’ is instead chillingly realistic. The Jewish women, men and children Wilfried and his police colleagues are ordered to roust out of their homes and lock inside a synagogue, before being transported to a concentration camp, are very much part of the city, they are the women and men and children of Antwerp, like Wilfried and his mate Lode, like Wilfried’s girlfriend Yvette, Lode’s sister. And yet they were treated like a subhuman species, and Wilfried and other men like him were, willingly or not, instrumental in that treatment.

In his nineties, Wilfried is still struggling to understand. The reason for such horror in the first place, but also and more poignantly, the reason for his actions. He never took openly the side of the Nazis, despite pressure by a former tutor and some of his colleagues. Yet he was wary of defying the occupiers and their local bootlickers. As Wilfried gradually uncovers more and more of his life during the war years, his bewilderment and his shame are constantly floating up to the surface, refusing to be engulfed by the tide of history and of memory.

Wilfried has an extensive family, and his story also encompasses the generations that follow him, all to a smaller or greater extent affected by his actions, from his wife Yvette to his children to his granddaughter Hilde, who tragically commits suicide. Actions that gradually emerge from the narration as the plot takes shape and gathers momentum.

The past cannot be buried, or shunted aside, or conveniently forgotten. And it will always find a way to come back to us, whether to bless us with its bounty, or haunt us with its evil. A message that sounds almost biblical, yet is fundamental in its simplicity, and validity. Olyslaegers has picked his messenger shrewdly: Wilfried was a normal lad living as best he could in abnormal times, and his voice is direct and, once shorn of the vagaries of old age, sharp as a knife. An unusual narrating voice in the varied panorama of historical thrillers, but one that works extremely well, once the reader has accepted Wilfried’s slightly haphazard rhythm.

Olyslaegers is a writer, columnist and playwright. In 2014 he was awarded the Ark Prize for the Free Word for his work and social engagement, and the Edmond Hustinx prize for his theatre work. ‘Will’ won four literary prizes in the Netherlands and Flanders and is the first of Olyslaegers’ novels to be translated into English. The tale Wilfried spins is captivating, making for initially slow but eventually addictive reading, and offering a new perspective on a period of history whose disasters still sadly echo in our day and age. With his writing, Olyslaegers is doing his best to stop this echo from dying out, from being muffled by the numbing noise of our times, and for this too ‘Will’ is a novel well worth reading.

Nicola Mira is a translator from Italian and French, specialised in journalism and non-fiction texts. Educated in the UK (BA Politics & Economics, St. Edmund Hall, Oxford), he has lived and worked in Italy, France and the UK. He currently lives in Cambridge. He has a Diploma in Translation (Italian to English) from the Chartered Institute of Linguists and is a member of the Society of Authors/Translators Association and English PEN. He translates texts from a range of industries, with fashion journalism his main focus. You can view his fashion translations on FashionNetwork.com. He has contributed to ‘In Other Words’, the journal of the British Centre for Literary Translation, and to London literary magazine Litro, where he also published a translation of an excerpt from Italian early XXth century author Gabriele D’Annunzio. When he is not translating, Nicola loves reading, writing and sports. He is the managing editor of sports statistics website Greatest Sporting Nation.
View all posts by Nicola Mira →
« Riverflow – Alison Layland
The Listening Walls – Margaret Millar »