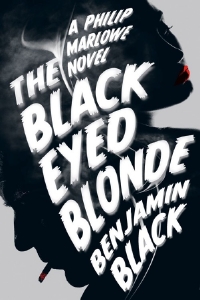 I’m with Stephen King, when he said, “Raymond Chandler, wherever he may be, is probably smiling.” Why? Because Philip Marlowe, the original hardboiled, hard-luck PI is back in business in The Black Eyed Blonde, by Benjamin Black. And he’s in more than capable hands.

It is the early 1950s. In Los Angeles, Marlowe is as restless and lonely as ever, and business is a little slow. And in the best Chandler tradition, a new client arrives: young, beautiful, fragrant and expensively dressed, Clare Cavendish wants Marlowe to find Nico Peterson, her former lover.

Soon Marlowe will find himself not only under her spell, but also tangling with one of LA’s richest families – and developing a singular appreciation for how far they will go to protect their fortune . . .

Aficionados have been fulsome in their praise of Black’s rendering of an authentic voice for Marlowe, which captures the underlying melancholia without lapsing into pastiche. The drinking, the cynicism and the inability to resist a damsel in distress are all there, but this Marlowe is certainly older: whether or not he’s any wiser is anyone’s guess.

Benjamin Black is the author of a series of well-crafted thrillers featuring the Dublin-based pathologist Quirke (which include Christine Falls, Elegy for April and Holy Orders).  Black is also, of course, the pen-name for playwright, screenwriter and Man Booker Prize winning novelist John Banville.

Some people argue against the resurrection of classic characters after the death of their creators, but that’s a view I never understood. If someone like Marlowe is treated with due respect and affection, given a nice dark case to solve, and his fate lies in the hands of a writer of the quality of Black/Banville, then what’s the problem? This is no cynical franchising, more an act of love.

My name is Linsey and I love crime fiction. The rebel in me likes to see rules broken, and the mother in me feels a need to see order restored - perhaps it’s a Freudian thing. I love the dark introspection of Scandinavian crime fiction; the beauty and cruelty of the Italian giallo and a nice big slice of US hard-boiled psychological thriller. As soon as I decide where I’m going on holiday, I’ll find a fictional detective who lives there – yes, I want to see the sites, but I also want to read the underbelly. That’s what’s so great about crime fiction. I’m a freelance writer, based in Manchester England; a city with a few crime writers of its own. If you’re planning a holiday here, look up Cath Staincliffe, Val McDermid, Chris Simms, Bill Rogers and others. And if you need a writer, take a look at my website – but I’m not showing you my underbelly.
View all posts by Linsey Parkinson →
« Crime fiction blogs worth Investigating (part 1)
Candle Flame – Paul Doherty »