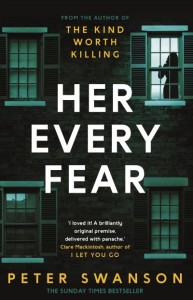 With his new novel, ‘Her Every Fear’, Peter Swanson proves once again, after ‘The Kind Worth Killing’, that he is a master of the psychological suspense novel. I should add of the crime novel too, because there are plenty of crimes, murders in fact, in this chilling story, but I think this would pigeonhole a work which deserves not to be classified simply in one category, as it belongs to that deliciously hybrid range of novels, part crime, part suspense, part psychological study, that show just how dark the dark side of human nature can be.

Above all, Swanson excels, in Simenonesque fashion,  at shaping characters that are both sharply defined and a little blurry at the edges, so that the reader, while being easily drawn to them, can never quite know what to expect from them.

The same goes for the plot: ‘Her Every Fear’ contains no high testosterone scenes, no shoot-outs or edge-of-the-seat chases, but once I got into the deceptively slow rhythm of the narrative – you have to trust Swanson and go with the flow to begin with – I was gradually but irresistibly enmeshed by the story, as wary of what would happen next as some his characters themselves.

Kate Priddy, a young Englishwoman with a tragic personal relationship behind her, decides to take up the offer of her US cousin, whom she never met, and swap her small London flat for his lavish Boston apartment for six months. She hardly knows what to expect once she arrives there, and is unclear about which direction her life should take anyway – an uncertain, possibly unreliable character, mild-mannered yet with a streak of independence in her, charming and yet hazy enough to keep readers on their toes.

Kate’s stay will start in the most dramatic way possible, as she discovers upon arrival that her/her cousin’s next door neighbour, a young woman called Audrey Marshall, has been horribly murdered the night before Kate arrived.

While Kate has to deal with this tragedy, Swanson turns the focus on Corbin Dell, her cousin who has just reached her flat in London. He is a wealthy young professional and a singularly lone figure, as his own family is not close to him and we are not told of any close friends. Once again, a character whose edges are not clearly defined: is it just coincidence he left at the same time as Audrey was killed? Why is his flat, as Kate finds, so devoid of personal touches? What kind of life did he lead in Boston?

As we start to ponder these questions together with fragile but determined Kate, Swanson opens a sudden window on Corbin’s past, and plunges the reader into a spate of chilling  murders. And as Corbin suddenly becomes a highly suspicious figure, the author treats us to more mysterious, slightly peculiar characters hanging around the lives of Corbin and, inevitably now, Kate. Only a handful of them, some rather more than peculiar, like neighbour Alan Cherney with his compulsion to spy on murder victim Audrey from his windows across the courtyard (echoes of Hitchcock’s ‘Rear Window’). The relatively small cast of characters plays into Swanson’s hands in terms of painting truly engaging personae, though it does leave eager beaver readers with a smaller field within which to hunt for Audrey’s killer.

I mentioned Simenon earlier, and one of the distinguishing features of Swanson’s is his ability to sketch truly intriguing villains – something at which the Belgian master (yes, he is my all-time favourite crime author!) excelled. I hate spoilers, so I won’t say anything else about who is responsible for Audrey Marshall’s death, except that Swanson does a highly original, and chilling,  job in portraying a twisted yet utterly believable mind.

Ultimately though, it is not the solution of the murder mystery in itself that defines this clever, atmospheric novel. It is the feeling of uncertainty and fear which Swanson unleashes in his protagonists and in the readers, it is the seeming effortless way in which he makes every situation, every encounter a potential twist or threat. Well done Peter Swanson for a fine follow-up to ‘The Kind Worth Killing’. 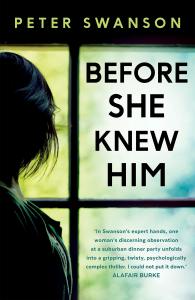 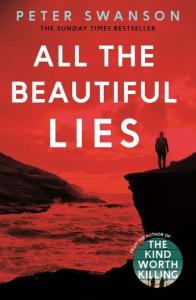 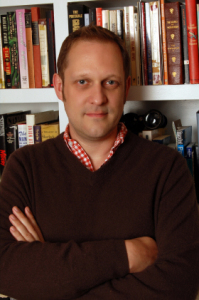 Nicola Mira is a translator from Italian and French, specialised in journalism and non-fiction texts. Educated in the UK (BA Politics & Economics, St. Edmund Hall, Oxford), he has lived and worked in Italy, France and the UK. He currently lives in Cambridge. He has a Diploma in Translation (Italian to English) from the Chartered Institute of Linguists and is a member of the Society of Authors/Translators Association and English PEN. He translates texts from a range of industries, with fashion journalism his main focus. You can view his fashion translations on FashionNetwork.com. He has contributed to ‘In Other Words’, the journal of the British Centre for Literary Translation, and to London literary magazine Litro, where he also published a translation of an excerpt from Italian early XXth century author Gabriele D’Annunzio. When he is not translating, Nicola loves reading, writing and sports. He is the managing editor of sports statistics website Greatest Sporting Nation.
View all posts by Nicola Mira →
« Crash Land – Doug Johnstone
The Pledge – Friedrich Dürrenmatt »