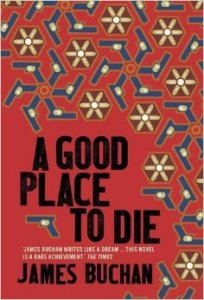 ‘A Good Place to Die’  by James Buchan is by no means a conventional crime novel, and even as a thriller it doesn’t quite fit the established canon. Yet it’s a brilliant story that contains in equal parts suspense, action and contemplation, spiced up by the exotic flavour of life (and love, and death) in Iran in the late 1970s – early 1980s, and finely blended together by James Buchan’s highly evocative writing.

The author was for many years a correspondent for the Financial Times in the Middle East and his knowledge of Iranian culture, society and history is dazzling. He can make you literally scent life in Isfahan, its bazaars and streets and private dwellings, and appreciate the depths of a cultural history that goes back thousands of years. You even get a sense of the rhythms of Iran’s truly beautiful language through dialogues that reproduce the cadences and register of some of the characters’ native Farsi.

Above all, you sense a deep awe, perhaps even love, for a world so different from the Anglo-Saxon one. The awe and respect felt by the English protagonist, John Pitt, which will  eventually fuse into love for his beautiful Iranian wife Shirin and overturn his notions of civility and civilisation as he will desperately seek to reunite himself with her and their daughter Layly.

I’m getting ahead of myself, perhaps unconsciously  inspired by the novel’s heart-rending prologue, which shows us Pitt thinking sweet memories of his wife and child, only to abruptly wake up in an Iranian prison cell, drenched in sweat and blindfolded.

Besides Iran, with its millennial history, outrageous Pahlavi ruling family and equally brutal, remorseless revolution that destroyed Shah Mohammad Reza’s rule in 1979, the novel’s other main characters are John Pitt and Shirin Farameh.

John is not yet 18 in 1974 when he leaves his home and goes abroad for the first time, hitch-hiking into London and beyond. More of a flight than a journey, eventually taking him to Isfahan where he ends up claiming a university degree he doesn’t have and teaching English at a private school. There he meets the veiled, beautiful and enigmatic Shirin and falls for her, and she for him. James Buchan is very clever at conveying the sweetness of their romance in wholly un-syrupy tones, relying on the frisson of the strange unknown that is produced when boy and girl from different worlds fall in love.

Not surprisingly, given that Shirin is the daughter of an Air Force general at the top of the Shah’s military hierarchy, their match is totally unsuitable, and they have to flee the town to stay together. They end up, by means of John’s unusual friend Mr Ryazanov, a Russian and the local KGB head of station – also an opium addict who takes a shine to the young Englishman – several hundred miles south of Isfahan, on the Persian Gulf, in an abandoned Russian ‘safe house’ by the sea. The unlikeliest setting for a honeymoon, but then they are an unlikely Romeo & Juliet. They’re equally as doomed as the Verona lovers though: John is suspected of being a British and/or a Russian spy and Shirin is an outcast in her own land for having fled home and married a heathen. They will have a daughter but will soon be separated, as enemies close in on them and John convinces Shirin the safest course is for him to return to the UK and for her and Layly to join him later.

It will all go horribly wrong however. Shirin and Layly are lost, and John, who hasn’t left the country, goes in search of them, ending up arrested and jailed by the newly-installed Khomeini revolutionaries as an imperialist spy. The second part of the novel charts his descent into a hell of prison cells, death sentences and ‘repentance’. John will embrace his captors and go fighting for them against the Iraqis, with the single-minded desperation of a man still hoping to find his lost family. They are his only rock in the tempestuous sea of a life that’s made him far less than an Englishman and not nearly enough of an Iranian – though close.

It is one of the novel’s great achievements, this twin feature of John’s: his innate Englishness – his enterprise and sense of justice – and his no less strong, acquired Iranian-ness, his passion verging on the lyrical. He is not, ultimately, a cheerful or even entirely likeable character. He’s prepared to go to extremes that most would find disconcerting and even distasteful. But he’s totally worthy of the reader’s admiration for his intensity in loving Shirin and Layly and his willingness to play a very long, dangerous and harrowing game in trying to get them back. For having doggedness and hope when there would normally be no place for them.

As a thriller hero, John Pitt doesn’t fit the established canon, but then I think this is one of the novel’s many strengths. And James Buchan does a wonderful job of weaving a powerful narrative around him and Shirin Farameh, around their youthful dreams and unflagging yearning to live and love, taking all of the many the risks that this involves, especially in a land as far-away,  geographically and culturally, as revolutionary Iran.

Nicola Mira is a translator from Italian and French, specialised in journalism and non-fiction texts. Educated in the UK (BA Politics & Economics, St. Edmund Hall, Oxford), he has lived and worked in Italy, France and the UK. He currently lives in Cambridge. He has a Diploma in Translation (Italian to English) from the Chartered Institute of Linguists and is a member of the Society of Authors/Translators Association and English PEN. He translates texts from a range of industries, with fashion journalism his main focus. You can view his fashion translations on FashionNetwork.com. He has contributed to ‘In Other Words’, the journal of the British Centre for Literary Translation, and to London literary magazine Litro, where he also published a translation of an excerpt from Italian early XXth century author Gabriele D’Annunzio. When he is not translating, Nicola loves reading, writing and sports. He is the managing editor of sports statistics website Greatest Sporting Nation.
View all posts by Nicola Mira →
« Interview with Kate Hamer (author of ‘The Girl in the Red Coat’)
Past Crimes – Glen Erik Hamilton »