Interview with Imogen Robertson (author of the Westerman – Crowther series)

Interview with Imogen Robertson (author of the Westerman – Crowther series) 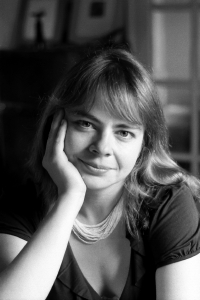 We are pleased to host today Imogen Robertson, best-selling author of the Westerman – Crowther novels set in Georgian England at the end of the XVIIIth century. The series comprises 4 novels and has been translated into more than 10 languages, including Japanese, Serb and Czech.

Q. Hello Imogen, nice to meet you and thank you for joining us. Let’s start with some background: you worked in TV before turning to writing, please tell us something about it.
A. I worked for an independent production company after university, and became a TV director, mostly for educational or children’s programmes. I did that until 2007.

Q. What did you like about directing?
A. It’s creative work and it’s also very collaborative, involving a lot of teamwork. It taught me about focusing ideas and about economy of expression. It all taught me about glitter and double-sided sticky tape.

Q. Your series features two amateur detectives, Harriet Westerman and Gabriel Crowther. What were your sources of inspiration?
A. I’m interested in the social history of the period. It’s a relatively distant time, yet it’s very ‘present’ in our life today, in (Georgian) architecture for example, or music. Amanda Vickery’s book ‘The Gentleman’s Daughter: Women’s Lives in Georgian England’ was a great source of inspiration. It tells how the role of women in society then could be different from the notion we might draw from, e.g. reading a Jane Austen novel. Also, I’m interested in the lives of people who featured in the ‘background’ of history, but were no less real.

Q. What about the crime element?
A. I was fascinated by the workings of the Justice system in the XVIIIth century, so different from today’s. It was more personal, less institutionalised. Also, I liked the idea of amateur sleuths as opposed to the professional detectives we are so used to reading about, and to seeing in action in real life.

Q. How do you go about your period research?
A. I work on different levels. The Old Bailey online archives are a brilliant source for characters dating back to the times in question. And I trawl for information across diverse sources such as the fiction and non-fiction of the period, contemporary writing on specific features (e.g. I read A. Owen Davies on XVIIIth century popular magic when researching for ‘Island of Bones’) and unorthodox but no less useful sources such as the account books of estate households, pamphlets, prints etc.

Q. How do you achieve the right balance between readability and period detail?
A. It’s a matter of attention and fine-tuning, and of knowing when to avoid details which will not matter to your reading public. In-depth research, lightly handled is what I’m aiming for and not letting the research get in the way of the story. For example there’s a scene in Anatomy of Murder where the family are disturbed at dinner. I could describe what they are eating, but it would slow the pace of the story, just when I want to speed it up.

Q. Violence and pace: your stories have both, and yet they represent an age which we think was ‘slower’ than ours; any comments?
A. Recreating the past is a matter of paying attention to detail: if your characters travel in a horse-drawn carriage, you must make sure you get them from A to B in the appropriate amount of time. Violence existed then as it does now, even if murder weapons may differ. My novels aren’t designed to capture readers with gory details, but I don’t refrain from picturing a slashed throat when I ‘need’ one. Another example: forensic medicine wasn’t developed in those times as it is now, and even if Crowther is an archetypal, if unorthodox, forensic pathologist, I felt I didn’t need to dwell on Scarpetta-like autopsies. As for the time? Well, communications and travel were slower, but life could be, and often was, brutal and short.

Q. Harriet Westerman is a strong and somewhat unconventional woman: tells us about her.
A. She is an independent, strong-willed woman. She is different from what we imagine of the personality of many women of her times, but then our sources are limited. There have always been independent and resourceful women. One role model was Lady Mary Wortley Montagu, wife of the British Ambassador to Turkey in 1716, (cf. Lady Mary Wortley Montagu: Comet of the Enlightenment, by Isobel Grundy). I wanted Harriet to have lived experiences beyond those of a dutiful daughter and country wife, this is why I made her the wife of a Royal Navy Commander. It gave her the chance to live outside the small world of the Home Counties.

Q. Westerman and Crowther: why two detectives?
A. For several reasons: I needed to counterbalance and integrate Westerman’s impulsive character with someone more reflective. I needed a man who could take care of things Harriet, as a woman of the times, wouldn’t have always been at liberty to do. Also, it’s a fact that two detectives can work effectively off each other. I made them complementary rather than similar, which helps both in the action and the dialogues. Crowther ‘revealed’ himself as a fully-formed character right from the start.

Q. About your stand-alone novel ‘The Paris Winter': do you plan a sequel to it?
A. I don’t. The novel’s protagonist, Maud Heighton (a young British painter living in Paris), is a fascinating character who went through a harrowing experience in early XXth century Paris, but she’s not a series character.

Q. Why not?
A. Because what happened to her in Paris was just one – dramatic – episode in a life that’s going somewhere else. I imagine her realising her artistic potential and doing things which are interesting for herself alone in the future. I see no reason to bother the poor girl again.

Q. Which crime writer, contemporary or from the past, do you admire?
A. Among the ‘classic’ authors, I’m a fan of Dorothy L. Sayers. I prefer her psychological novels such as ‘Gaudy Nights’, to the ‘plotty’ ones such as ‘The Nine Tailors’. I’ve also appreciated Ngaio Marsh and of course A. Conan Doyle. As for contemporaries, I think Val McDermid is a great writer, William Ryan and Sarah Waters for their historical fiction craft. And I’m a fan of Ian Rankin and Peter Robinson. I also like Gillian Flynn. I find her first novel, ‘Sharp Objects’, more interesting – on a psychological level – than her blockbuster success ‘Gone Girl’.

Q. Finally, a quick word on your future plans.
A. Write, write, write! A new Westerman & Crowther novel is in the works, so get ready for it!

Q. Thank you very much for the interview Imogen, and keep up the good work!