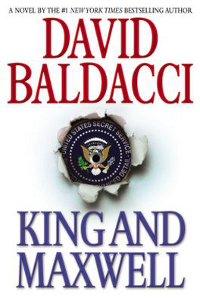 Another giant of the thriller scene, David Baldacci, has done it again with this action-packed page-turner.

Sean King and Michelle Maxwell were once secret agents; now they’re private investigators, and it’s clear they’ve stumbled across something sinister when they almost run over a teenage boy on a dark road. Tyler Wingo is devastated after receiving news of his father’s death in Afghanistan. Soon after, however, he receives an impossible email – sent from his father, but after his death. Things are clearly not what they seem and he reaches out to King and Maxwell for answers. Is Wingo Senior really dead and what does this mystery mean for Tyler’s very existence?

This young man is alone in the world and he needs protection.  It’s not going to be easy – or safe – for anyone who touches upon the conspiracy that soon starts to unfold.

King and Maxwell is a cracking read, packed with humour, excitement and all the ingredients that make Baldacci’s novels such fantastic reads. A short-lived TV adaption of the King and Maxwell series was broadcast in summer 2013. Despite its popularity with viewers, TNT decided not to make a second season.

David Baldacci has published 26 best sellers, several of which have been adapted for film and television. His work has been translated into more than 45 languages and sold in more than 80 countries; over 110 million copies are in print worldwide. He was inducted into the 2011 International Crime Writing Hall of Fame and received the 2012 Barnes & Noble Writers for Writers Award. He’s also a committed campaigner and fundraiser for literacy and education causes.

My name is Linsey and I love crime fiction. The rebel in me likes to see rules broken, and the mother in me feels a need to see order restored - perhaps it’s a Freudian thing. I love the dark introspection of Scandinavian crime fiction; the beauty and cruelty of the Italian giallo and a nice big slice of US hard-boiled psychological thriller. As soon as I decide where I’m going on holiday, I’ll find a fictional detective who lives there – yes, I want to see the sites, but I also want to read the underbelly. That’s what’s so great about crime fiction. I’m a freelance writer, based in Manchester England; a city with a few crime writers of its own. If you’re planning a holiday here, look up Cath Staincliffe, Val McDermid, Chris Simms, Bill Rogers and others. And if you need a writer, take a look at my website – but I’m not showing you my underbelly.
View all posts by Linsey Parkinson →
« Innocence – Dean Koontz
Carnal curiosity – Stuart Woods »