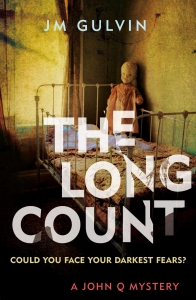 As does crime, good crime writing needs concealment. In his first John Q. mystery, ‘The Long Count’, JM Gulvin does conceal something big in the story. Something that, once revealed, will hit readers like a freight train. Or like a well-disguised royal flush. Gulvin works his surprise(s) cleverly, as an experienced poker player would, with virtually no tells (well, there is one, but only eagle-eyed readers will spot it). His deadpan, clear yet polished style is an excellent disguise in itself: the narrative moves at a steady, almost mesmeric pace, and the plot is finely structured, with plenty of layers to keep readers interested.

Concealing does imply an authorial risk: shrouding the story may cause the reader’s interest to flag, for want of page-turning spice. There is no danger of that in ‘The Long Count’. Murder happens soon enough, followed by what looks like a suicide. Icarus Bowen, a WW2 veteran living alone in Marion County, Texas, is found dead with a bullet hole in his temple. The local cops pin a ‘suicide’ label on it but Texas Ranger John Quarrie, on his way to look after the assault-turned-murder of a policeman not far away, is diverted to the Bowen house and has no doubts it’s murder.

Quite a lot to happen in the first 20 pages (plus another murder, and the discovery of a boy’s skull buried deep in the mud of a river on the Oklahoma-Texas border) to keep any crime fiction enthusiast interested. What’s fascinating is that it all seems to happen at a pace that’s much more sedate than in other contemporary crime stories but, thanks to Gulvin’s finely-crafted writing, the effect is no less riveting.

It is, after all, 1967, and the most advanced communications technology law enforcement officers possessed were the telephone (not every household had it) and the short-wave radio. Enough however for John Q. to keep in touch with his headquarters in Amarillo and with the local police stations, as he begins his lone hunt for the triple murder suspect (a policeman, a travelling salesman and a woman at a charitable institution), while keeping Icarus Bowen’s unlikely suicide firmly in mind.

I mentioned layers in the story and Gulvin adds them unhurriedly but with impeccable timing. Icarus’ son Isaac, a three-tours Vietnam veteran, is back on leave and soon shows up at his dead father’s house, and is as doubtful about a suicide as is John Q. Then there is Isaac’s twin brother Ishmael: we learn that he is affected by mental problems and was held in a Texas institution, oddly enough – for he was no criminal – an institute for the criminally insane called Trinity, which burned to the ground a few weeks before. Most of the inmates and staff were accounted for, but not Ishmael.

Isaac has a tough homecoming to face : a dead father, a missing, mentally unstable brother and a long-estranged mother whose whereabouts are unknown. And quiet, determined and astute John Q. has plenty to work on to try and unravel the string of violent deaths on his relatively remote Texas patch. With the added complication of a resourceful, ambitious psychiatrist, Dr Mason Beale, who has been treating Ishmael and moved him to Trinity for unfathomable reasons.

There are further elements in the plot, but revealing anything else would spoil it. JM Gulvin is an author with many other books to his credit, including Ewan McGregor and Charley Boorman’s travel best-seller ‘Long Way Down’, but this is his first John Q. mystery, and we hope he will produce a string of them. If anything, John Q. himself deserves to be fleshed out further: he is a well-realised, intriguing character, but we learn comparatively little about him. He’s tough, fair and reserved, as perhaps a widowed Korean War veteran may be, but there is clearly much more to him that could attract readers.

And, if this first highly interesting novel is any evidence, JM Gulvin is well set to produce further riveting crime stories. We certainly look forward to reading them. 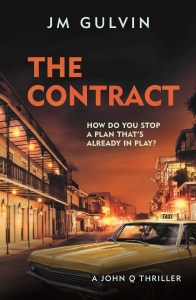 Nicola Mira is a translator from Italian and French, specialised in journalism and non-fiction texts. Educated in the UK (BA Politics & Economics, St. Edmund Hall, Oxford), he has lived and worked in Italy, France and the UK. He currently lives in Cambridge. He has a Diploma in Translation (Italian to English) from the Chartered Institute of Linguists and is a member of the Society of Authors/Translators Association and English PEN. He translates texts from a range of industries, with fashion journalism his main focus. You can view his fashion translations on FashionNetwork.com. He has contributed to ‘In Other Words’, the journal of the British Centre for Literary Translation, and to London literary magazine Litro, where he also published a translation of an excerpt from Italian early XXth century author Gabriele D’Annunzio. When he is not translating, Nicola loves reading, writing and sports. He is the managing editor of sports statistics website Greatest Sporting Nation.
View all posts by Nicola Mira →
« Interview with Glen Erik Hamilton, author of ‘Hard Cold Winter’
Killer Nashville Writers’ Conference Announces Scholarship Opportunities »