The Missing File – Dror A. Mishani

The Missing File – Dror A. Mishani 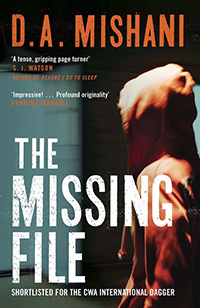 ‘Do you know why there are no detective novels in Hebrew?’ The question is asked by Police Inspector Avraham Avraham to Hannah Sharabi, who shows up one evening at the station in Holon, a small town close to Tel Aviv (Israel), to report the disappearance of Ofer, her sixteen years old son: he had left home early that same morning and never reached school.

The answer that Avraham offers is because crime in Israel is rare. Because there are no serial killers or spectacular kidnappings, crimes are usually committed by neighbours or relatives, and there’s no need for complex investigations. As attempts to reassure a distraught mother go, Avraham’s is quite clumsy. The inspector doesn’t appear to be the sharpest of cops. Hovering between indecision and mild disinterest, he sends Hannah home, suggesting she waits until the next morning. Advice which Avraham will deeply regret.

Author Dror A. Mishani also explains (in the afterword) that investigative heroes in Israel are traditionally soldiers or spies, and rarely policemen. Inspector Avraham doesn’t seem in fact to be much of a hero: he’s a calm, solitary man, close to depression, in a manner which reminds me of Icelandic Inspector Erlendur in A. Indridason’s chilling stories.

The mother will return to the station the following day: Ofer is still nowhere to be found. Slowly, almost reluctantly, the investigation gets off the ground, while we meet the cast of Avraham’s colleagues: trusted Ma’alul, young, meddling Shrapstein, very much after his own agenda, and sensitive Ilana, the Chief Inspector, career woman and old friend of Avraham’s. I mention the group which embarks upon the sequence of door-to-door questioning and routine checks because Mishani is very clever in giving a sense of the teamwork involved. And of the virtual absence of investigative direction. Doubts creep in, data goes missing, unwarranted delays occur, Avraham is even shipped off to Brussels for a professional exchange with the Belgian police just when a thin clue seems to materialise.

A lack of direction I found seductive for its hypnotic ‘normality’. Action thriller lovers, beware: what fascinated me in this novel is its very ordinary normality, the total absence of adrenalinic chases, shootings and bloodshed. And equally, the presence of other ingredients which are essential in sophisticated crime fiction: doubts, misunderstandings, frustration, the insidious fear for something – a teenager literally vanished into thin air – which no one can make any sense of. Blended with Mishani’s skill in getting under the skin of his characters, the people next door like the teacher who lives in the same building as Ofer, cleverly revealing their daily obsessions, great and small.

Gradually,  with the frustrating randomness which is the hallmark of ‘real’ investigations, and thanks to Avraham’s perseverance and acumen, we discover the fears and passions, aspirations and delusions of the people who live close to Ofer: his parents, his sister, his few friends. The teacher, neighbour and aspiring writer Ze’ev stands out among them, a man with a  multi-layered personality whose relationship with Ofer is more complex than first appeared.

Hat off to Dror A. Mishani for having built a gripping plot out of such apparently unremarkable elements. Playing with nuances, words unsaid, and the suspense created by the unexpected collapse of delicately poised relationships. This is a highly original novel, a different crime story, even though it’s firmly anchored to the genre’s canon. A story told with a prose that’s sharp, light and effective, apt at rendering the range of feelings which make Avraham a memorable character. And this is just the beginning…

Nicola Mira is a translator from Italian and French, specialised in journalism and non-fiction texts. Educated in the UK (BA Politics & Economics, St. Edmund Hall, Oxford), he has lived and worked in Italy, France and the UK. He currently lives in Cambridge. He has a Diploma in Translation (Italian to English) from the Chartered Institute of Linguists and is a member of the Society of Authors/Translators Association and English PEN. He translates texts from a range of industries, with fashion journalism his main focus. You can view his fashion translations on FashionNetwork.com. He has contributed to ‘In Other Words’, the journal of the British Centre for Literary Translation, and to London literary magazine Litro, where he also published a translation of an excerpt from Italian early XXth century author Gabriele D’Annunzio. When he is not translating, Nicola loves reading, writing and sports. He is the managing editor of sports statistics website Greatest Sporting Nation.
View all posts by Nicola Mira →
« Interview with Kevin Murray (author of Blood of the rose)
Interview with Leonce Gaiter (author of In the Company of Educated Men) »