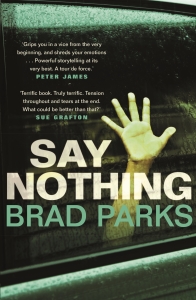 I confess to having a weakness for writers who take authorial risks. Especially when the risks pay off.

Brad Parks, author of the multi award-winning series featuring investigative reporter Carter Ross, has indeed taken up quite a few challenges, thriller fiction-wise, in his new stand-alone novel ‘Say Nothing’. To his credit, he has come out on top, producing a tense, compelling thriller with a host of unconventional features.

‘Say Nothing’ is about the kidnapping of two six-year old twins, about a billion-dollar trial, and its protagonist and narrator is a Virginia Federal judge. In other words, Parks has upended genre conventions (no dead body in the first chapter – though expect some later – and no clever detective chasing after the bad guys), has challenged John Grisham and his ilk in the legal thriller stakes, and yet in doing so has shied away from picking a lawyer as his main character.

Instead he has focused on the member of a profession  which I’ve rarely seen portrayed in crime and thriller fiction as anything more than an ancillary, though august, figure: a judge.

The Honorable Scott A. Sampson actually comes across as quite an ordinary guy, for a US Federal judge. He has a loving wife, Alison, and twin kids, Sam and Emma, whom he dotes on. The family lives in the countryside in Gloucester County, Virginia, and leads a cheerful, uncomplicated  life, as much as that of two working parents raising twin children of six can be. Then one afternoon  Sam and Emma are picked up from school by an unknown person impersonating as their mother, and they vanish.

It is the start of a nightmare for Scott and Alison. Uncomprehending, powerless and terrified for their kids, they are plunged deeper into a fathomless horror when the kidnappers make contact with Sampson and order him to manipulate a verdict, acquitting a blatantly guilty small-time drug dealer, if he wants his children back unharmed. Sampson has no choice but comply, and the parental nightmare immediately ushers in a professional one too. The kidnappers release Sam, the boy, to ‘reward’ Sampson for the drug dealer verdict, only to turn the screws viciously tighter by holding on to Emma as a bargaining chip for more, higher-stakes blackmail.

Parks is very adept at immersing the reader in Judge Sampson’s harrowing new existence, which careens off from a normal life to one in which every moment is pure torment. He and Alison live on a knife-edge, striving to hide Emma’s disappearance from family and work relations, and above all from the law-enforcement authorities, to comply with the kidnappers’ demands.

Every aspect of their lives now hides cruel pitfalls. Anything as simple as meeting with Alison’s sprawling family, or dealing with Sampson’s own judicial team, which cannot make heads or tails of his professional behaviour, causes them nerve-wracking tension. The normal in everyday life turns into a kind of torture, generating a stream of twists in the story which hook the reader relentlessly in.

Parks does a remarkable job, managing to sustain the reader’s interest with a story which, apart from the initial kidnapping and not until the plot has further developed, is conspicuous for the absence of some of the classic crime-fiction ingredients. He does so by deftly exposing Scott Sampson’s harrowing dilemmas, his having to choose between justice and his kids’ life, between the constraints of the law and the demands of the criminals who hold Emma’s life in their hands.

They are chilling alternatives, the stuff of a powerful and engaging plot, which Parks then ratchets up another notch as he develops the novel’s other major strand. Which of the parties fighting a billion-dollar trial in Judge Sampson’s court could be behind the abduction? Who is trying to manipulate the judge, and why? Sampson attempts to find out himself but he is no investigator, only a man desperate to save his family and his professional life. He stumbles on, until he thinks he has found an answer, a chilling one which embeds another vicious barb into his already fraught mind.

This is where I need to stop dissecting the plot – there is much in store in terms of surprises and I dislike spoilers. I hope I’ve done enough to show why ‘Say Nothing’ is such an interesting thriller. It tells a tale of crime and greed from a vantage point which is unusual, and even though the plot does not feature a classic investigation, without adrenalin-charged chases or similar high-tension incidents, it grips the reader just as strongly as a Lee Child or Jeffery Deaver story can.

Parks’ characterisation is first-rate, especially in portraying the conflicting sides of Judge Sampson’s personal life, law man vs family man,  and the havoc that the strain of the children’s kidnapping wreaks in his and his wife Alison’s minds. ‘Say Nothing’ is not for the faint-hearted: it hurls its protagonists, and the readers, off the course of ordinary events and ordered lives, and it takes no prisoners, mercilessly exposing both personal failings and those of the justice system, as the plot hurtles to its gut-wrenching finale.

It is quite an authorial challenge that Parks takes up with this novel, but he definitely rises to it, through clever narrative and faultless timing. ‘Say Nothing’ shows what happens when orderly lives are twisted out of shape by crime, when the veneer of civility is stripped off and the sensitive core of a person’s emotions is exposed. Not a comfortable sight to behold, and not an easy one to narrate: hats off to Brad Parks for turning it into a remarkable and original thriller.

Nicola Mira is a translator from Italian and French, specialised in journalism and non-fiction texts. Educated in the UK (BA Politics & Economics, St. Edmund Hall, Oxford), he has lived and worked in Italy, France and the UK. He currently lives in Cambridge. He has a Diploma in Translation (Italian to English) from the Chartered Institute of Linguists and is a member of the Society of Authors/Translators Association and English PEN. He translates texts from a range of industries, with fashion journalism his main focus. You can view his fashion translations on FashionNetwork.com. He has contributed to ‘In Other Words’, the journal of the British Centre for Literary Translation, and to London literary magazine Litro, where he also published a translation of an excerpt from Italian early XXth century author Gabriele D’Annunzio. When he is not translating, Nicola loves reading, writing and sports. He is the managing editor of sports statistics website Greatest Sporting Nation.
View all posts by Nicola Mira →
« The Bird Tribunal – Agnes Ravatn
The Contract – JM Gulvin »