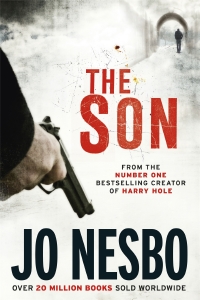 If there were a crime writers’ award for a picaresque life, it wouldn’t be at all difficult to justify giving it to Jo Nesbø.  After being signed by Norwegian premiership side FC Molde, a cruciate ligament injury ended his footballing career.  He then worked as a financial analyst by day, and played in a major chart-topping rock band by night. The Bat, his first thriller, arose from a request for a book about touring. It didn’t quite work out that way. The Son is Jo Nesbø’s twelfth novel.

Sonny is serving time in prison, but a confession from a fellow prisoner changes everything. A secret is revealed about his disgraced father and Sonny realises he has to get out – and fast.  He needs to escape from prison, discover the real truth about his father and punish those who have lied to him for the whole of his life.

Nesbø is a pre-eminent writer of Scandinavian noir. You see his work everywhere – the covers which feature the women with haunted expressions, and the stickers proclaiming him as the new Stieg Larsson.  His international best-sellers have shifted over nine million copies.  His best known creation is the troubled detective Harry Hole: a man who’s unpopular with his colleagues, has trouble curbing his appetites and still manages to remain the most talented and driven investigator on the force.

Hole novels include Cockroaches, The Redbreast and The Leopard (2009). When I read The Snowman, in which Hole hunts down Norway’s first serial killer, its blend of visceral horror and unsettling, creeping fear literally caused me a few sleepless nights.

Outside the dark world of Harry Hole, Nesbø wrote the novel Headhunters, which became a critically acclaimed action movie in 2011.  Horrific and hilarious by turns, this was an astonishingly confident, creative, edge-of-the-seat thriller with a genius ending. It’s one of those European films that’s so good, Hollywood will have to pointlessly remake it – something else Nesbø may have in common with Stieg Larsson.