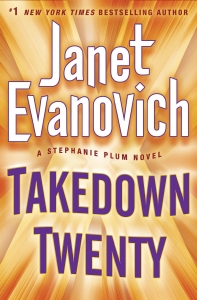 Stephanie Plum is a New Jersey bounty hunter, working for cousin Vinnie’s bail-bond office.  She knows all too well that it’s a risky family business. When she’s charged with tracking down mobster Salvatore “Uncle Sunny” Sunucchi, the family business takes on a new meaning and the stakes are higher than ever. In those sorts of circles, it’s hard to tell which side even the cops are on. And if that weren’t enough, there are even more family complications when Stephanie finds herself working alongside Grandma Mazur to solve the murder of her bingo partner.
Her car is riddled with bullet holes, the mob’s on her tail and the bingo balls aren’t being pulled in her favor.  There’s also a giraffe.
This is going to be some takedown…

Janet Evanovich is famous for her ballsy, earthy heroines: they may not always make the right decisions, but their hearts are always in the right place. It perhaps comes as a surprise then, that she started out as a romantic author for the Bantam Loveswept series. Wanting action of a different kind, Janet took up a life of crime and adventure with her first Stephanie Plum novel, One for the Money, in 1994.

The sharper-eyed among you will have noticed that Takedown Twenty is the twentieth book in this massively popular series. Mixing crime, adventure, romance and a liberal dash of humor, Evanovich is one of the most inventive and refreshing thriller authors in America today.

Reviews have been a mixed for this latest outing, but mainly on the basis that Evanovich just keeps on giving her fans what they want. If you love a bit of classic Plum, then get yourselves a big bag of Cheez Doodles and plenty of beer – this latest adventure demands to be read in one sitting.

My name is Linsey and I love crime fiction. The rebel in me likes to see rules broken, and the mother in me feels a need to see order restored - perhaps it’s a Freudian thing. I love the dark introspection of Scandinavian crime fiction; the beauty and cruelty of the Italian giallo and a nice big slice of US hard-boiled psychological thriller. As soon as I decide where I’m going on holiday, I’ll find a fictional detective who lives there – yes, I want to see the sites, but I also want to read the underbelly. That’s what’s so great about crime fiction. I’m a freelance writer, based in Manchester England; a city with a few crime writers of its own. If you’re planning a holiday here, look up Cath Staincliffe, Val McDermid, Chris Simms, Bill Rogers and others. And if you need a writer, take a look at my website – but I’m not showing you my underbelly.
View all posts by Linsey Parkinson →
« Cross My Heart – James Patterson
Innocence – Dean Koontz »