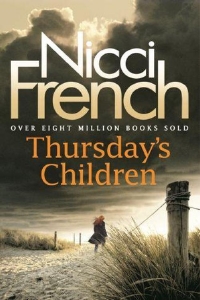 They say that psychological thriller giant Nicci French has a split personality, but that’s because she’s quite literally two people. Husband and wife writing team Sean French and Nicci Gerard have been working together for nearly twenty years. Thursday’s Children, the latest Nicci French offering, is the fourth to feature psychotherapist Frieda Klein. Previous titles being Blue Monday, Tuesday’s Gone and Waiting for Wednesday.

Frieda has escaped rural Suffolk for new life in London. After a number of years, a former schoolmate turns up, looking for help in finding her missing daughter.  As Frieda’s painful memories resurface from a past she thought she had left behind far behind, she realises she will have to return to Suffolk and face it anew.  Frieda is in a race against time to bring dark secrets into the light and piece together a terrible truth – before more people die.

Nicci French does suspense like no one else. Intelligent, likeable heroines are often plunged into the most terrible situations, then underestimated or doubted by the men around them. Her strength is that she makes you feel like the things in her stories could happen to you. No high-octane explosions, diamond thieves or flashy car chases: just bad luck, bad decisions and bad people. The juxtaposition of the normal, the domestic, set against very real dangers is a powerful one. Beneath the Skin features a turn in the plot that I’ve never read anywhere else.  Don’t ask me what it is: I don’t do spoilers.

Thursday’s Children is the sixteenth Nicci French collaboration and every one of them is a brilliantly tense read.  Previous novels include The Red Room, Land of the Living, Killing Me Softly and Catch Me When I Fall.  The novels Secret Smile, Beneath the Skin, The Safe House and What do to When Someone Dies were all successfully adapted for television.

Eagerly awaited and deservedly so.

My name is Linsey and I love crime fiction. The rebel in me likes to see rules broken, and the mother in me feels a need to see order restored - perhaps it’s a Freudian thing. I love the dark introspection of Scandinavian crime fiction; the beauty and cruelty of the Italian giallo and a nice big slice of US hard-boiled psychological thriller. As soon as I decide where I’m going on holiday, I’ll find a fictional detective who lives there – yes, I want to see the sites, but I also want to read the underbelly. That’s what’s so great about crime fiction. I’m a freelance writer, based in Manchester England; a city with a few crime writers of its own. If you’re planning a holiday here, look up Cath Staincliffe, Val McDermid, Chris Simms, Bill Rogers and others. And if you need a writer, take a look at my website – but I’m not showing you my underbelly.
View all posts by Linsey Parkinson →
« Interview with Luca Veste (author of Dead gone)
The Stone Wife – Peter Lovesey »