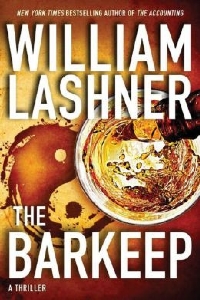 Some things are just too awful to contemplate and Justin Chase lives his life in a state of Zen serenity: it’s what gives him peace and helps him to cope with things he’d rather not think about. He tends bar and life is more or less OK.
That’s until the arrival of Birdie Grackle, a foul-mouthed alcoholic, who comes into the bar and admits to the murder of Justin’s mother, six years before. Justin’s father, meanwhile, is serving a life sentence for the crime. A horrified Justin is plunged back into his violent past – who paid Grackle to kill and why? Before long, there’s a murderer looking for him – and it’s not to buy him a drink.

The Barkeep is a novel that shows that however you try to detach yourself, you can’t ever really hide from inner feelings or from your past. As the book itself says: “Some stains are too deep to clean.”  Even for a barkeep, it seems.
While some readers have found the Zen imagery a little irritating, others have enjoyed the vivid and sensuous descriptions of drinks – and a few cocktail recipes along the way. The Barkeep has had some great reviews and seems to have been well-received by most. It’s a good, easy read to curl up with, maybe with a teeny finger of scotch…

William Lashner is perhaps better known for his Victor Carl series, which chronicles the misadventures of a defense lawyer in Philadelphia. Booklist described Carl as one the “most compelling, most morally ambiguous characters” in crime fiction. Now we all love a bit of moral ambiguity, don’t we?  Cheers!

My name is Linsey and I love crime fiction. The rebel in me likes to see rules broken, and the mother in me feels a need to see order restored - perhaps it’s a Freudian thing. I love the dark introspection of Scandinavian crime fiction; the beauty and cruelty of the Italian giallo and a nice big slice of US hard-boiled psychological thriller. As soon as I decide where I’m going on holiday, I’ll find a fictional detective who lives there – yes, I want to see the sites, but I also want to read the underbelly. That’s what’s so great about crime fiction. I’m a freelance writer, based in Manchester England; a city with a few crime writers of its own. If you’re planning a holiday here, look up Cath Staincliffe, Val McDermid, Chris Simms, Bill Rogers and others. And if you need a writer, take a look at my website – but I’m not showing you my underbelly.
View all posts by Linsey Parkinson →
« Interview with Chris Carter (author of the Robert Hunter series)
The Invisible Code – Christopher Fowler »