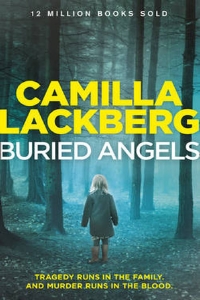 What could possibly be cooler than a husband and wife / detective and crime writer team? Not very much – unless they’re also Swedish.  Scandi noir heaven. The team in question is Detective Patrik Hedstrom and Erica Falck and Buried Angels by Camilla Lackberg is their eighth case together.

Easter 1974. A family vanishes from their home on an idyllic island off the coast of Sweden. The table is set, but the house is deserted, apart from their one-year-old daughter, Ebba.  Now, years later, Ebba is back on the island because she and her husband have suffered the loss of their child. They plan to make a fresh start by renovating the house and running it as a bed and breakfast. Within days, however, they’re targeted in an arson attack. Detective Patrik Hedstrom, whose wife Erica has always been fascinated by the mystery of Ebba’s abandonment, is assigned to the investigation.

When dried blood is found under the floorboards of the old house, it seems that the cold case involving the missing family is about to be brought back to life. And soon, Patrik and Erica are consumed by the hunt for a killer who will stop at nothing to keep the past buried.

Camilla Läckberg’s strong, character-led thrillers, set in and around the ‘peaceful’ seaside town of Fjällbacka, have become hugely popular with fans of the Scandinavian genre, especially in the UK where her sales outstrip those of Stieg Larsson. She’s sold nearly five million books in her native Sweden – a country with only nine million people in total! She’s very much a celebrity there, having been (and married) a reality TV star and co-written a best-selling cookery book.  We all know how much great detectives like Brunetti and Montalbano are fuelled by great food: makes perfect sense to me.

My name is Linsey and I love crime fiction. The rebel in me likes to see rules broken, and the mother in me feels a need to see order restored - perhaps it’s a Freudian thing. I love the dark introspection of Scandinavian crime fiction; the beauty and cruelty of the Italian giallo and a nice big slice of US hard-boiled psychological thriller. As soon as I decide where I’m going on holiday, I’ll find a fictional detective who lives there – yes, I want to see the sites, but I also want to read the underbelly. That’s what’s so great about crime fiction. I’m a freelance writer, based in Manchester England; a city with a few crime writers of its own. If you’re planning a holiday here, look up Cath Staincliffe, Val McDermid, Chris Simms, Bill Rogers and others. And if you need a writer, take a look at my website – but I’m not showing you my underbelly.
View all posts by Linsey Parkinson →
« Northanger Abbey – Val McDermid
Interview with Richard Lange (author of Angel Baby) »