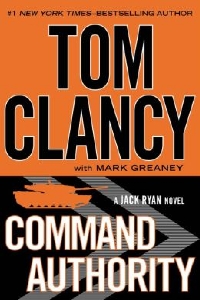 Tom Clancy was quite simply the king of the political thriller. He was the creator of the best-selling Jack Ryan novels, which include The Hunt for Red October, Patriot Games, Clear and Present Danger and the Sum of All Fears. A string of Hollywood blockbuster action movies followed, with big-hitters like Harrison Ford, Alec Baldwin and Ben Affleck picking up the Ryan role. A fifth movie, Jack Ryan: Shadow Recruit, with Chris Pine, directed by Kenneth Branagh, is due for release in early 2014.

While the man himself sadly passed away in October 2013, the franchise of tightly-plotted, fast-paced, edge-of-your-seat Cold War suspense thrillers lives on. Demand for Clancy’s work in recent years had far outstripped his ability to deliver, so a series of ‘co-authors’ was brought in to realize his vision, working from his creative brief. It’s a smart way to give people what they want: find the winning formula and keep on delivering. Handpick quality writers and build on the Clancy brand.  Everyone’s happy – and it seems that everyone really is.

The latest outing – Command Authority – is co-authored by third-time Clancy collaborator Mark Greaney. It sees the rise of a new strong man in Russia, with a dark secret in his past: a mystery to which President Jack Ryan Senior may hold the key.

Greaney is himself an acclaimed best-selling author. His Gray Man series is published in several languages, received rave reviews and multiple award nominations and there’s a new movie adaptation in the pipeline. His research involved visiting more than 15 countries and calling in at the Pentagon and other Washington, D.C. intelligence agencies. He also holds a degree in International Relations and Political Science, and trained alongside military and law enforcement in the use of firearms, battlefield medicine, and close-range combative tactics.

It looks like the Jack Ryans, both Senior and Junior, are most definitely in safe hands.

My name is Linsey and I love crime fiction. The rebel in me likes to see rules broken, and the mother in me feels a need to see order restored - perhaps it’s a Freudian thing. I love the dark introspection of Scandinavian crime fiction; the beauty and cruelty of the Italian giallo and a nice big slice of US hard-boiled psychological thriller. As soon as I decide where I’m going on holiday, I’ll find a fictional detective who lives there – yes, I want to see the sites, but I also want to read the underbelly. That’s what’s so great about crime fiction. I’m a freelance writer, based in Manchester England; a city with a few crime writers of its own. If you’re planning a holiday here, look up Cath Staincliffe, Val McDermid, Chris Simms, Bill Rogers and others. And if you need a writer, take a look at my website – but I’m not showing you my underbelly.
View all posts by Linsey Parkinson →
« The Prince of Risk – Christopher Reich
Fear Nothing – Lisa Gardner »