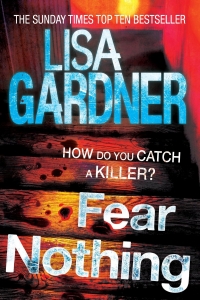 In a past, more soft-focus life, Lisa Gardner was the romantic novelist Alicia Scott. Now she’s on the dark side and she’s right where she belongs: spinning taught, fast-paced thrillers, where the suspense can sometimes be almost unbearable. Reading Gardner’s novels makes you greedy, and you gobble up the pages, hungry for answers. She’s one of the very best psychological thriller writers out there.

Fear Nothing is no different. A serial killer is walking the streets of Boston, and Detective D. D. Warren must look inside herself and face her darkest fears.
D. D. is seriously injured, unable to move her arm, unable to return to work after a crime scene incident that she just cannot remember. Six weeks later a woman is murdered in her bed: beside her, a bottle of champagne, a single red rose and the same calling cards found at D. D.’s fateful crime scene. D. D. herself is now a key witness, but she still can’t lift her child, load her gun, or recall a single detail from the night that may have cost her everything.
The Rose Killer must be stopped. Even if she isn’t back on the job, D. D.’s on the hunt, fighting for her very survival.

One of my very favourite things about Lisa Gardner (aside from her novels!) is her Kill A Friend, Maim a Mate sweepstake (for US wannabe murderers, it’s KAF, Maim a Buddy). You send the name of someone you’d love to kill – maybe your boss, an irritating neighbour or a partner who snores – and with a bit of luck Lisa will bludgeon, stab, shoot or make life generally extremely difficult for that person in her 2014 novel. It’s all a bit of harmless fun – or is it?

My name is Linsey and I love crime fiction. The rebel in me likes to see rules broken, and the mother in me feels a need to see order restored - perhaps it’s a Freudian thing. I love the dark introspection of Scandinavian crime fiction; the beauty and cruelty of the Italian giallo and a nice big slice of US hard-boiled psychological thriller. As soon as I decide where I’m going on holiday, I’ll find a fictional detective who lives there – yes, I want to see the sites, but I also want to read the underbelly. That’s what’s so great about crime fiction. I’m a freelance writer, based in Manchester England; a city with a few crime writers of its own. If you’re planning a holiday here, look up Cath Staincliffe, Val McDermid, Chris Simms, Bill Rogers and others. And if you need a writer, take a look at my website – but I’m not showing you my underbelly.
View all posts by Linsey Parkinson →
« Command Authority – Tom Clancy, with Mark Greaney
A Measure of Blood – Kathleen George »