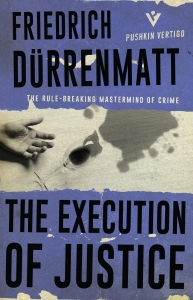 Crime novels can be violent, occasionally gory, almost always nerve-wracking but, ultimately, they are designed to be comforting. Life may be grim, but in the end order will be restored. There is always a flicker of light the end of the tunnel.

And there’s crime fiction à la Friedrich Dürrenmatt. It can be violent, occasionally gory, nerve-wracking in a slightly self-deprecating way. But never comforting. There is no light at the end of the tunnel, very little hope of unravelling the motives for the dramas he paints with his masterly hand. Very little clarity, at least in the mind of his often-ambivalent protagonists. What you get is not fiction that feels like ‘real life’, but ‘real life’ that’s so unfathomable it sounds fictional – and who knows whether it is or it isn’t.

Readers, you’re warned: in ‘The Execution of Justice’, Dürrenmatt will play havoc with genre conventions, will sweep the rug from under your feet with the sheer unreliability of his characters, will tamper with narrative time, shifting backwards and forwards at will, and even add an ‘Editor’s Afterword’ in which he features as himself, the author, in a disturbing cameo that will kill any chance of clarity and closure. But in doing so, he spins some of the most arresting, deliciously subversive fiction you’ll ever read, crime or otherwise. In my personal opinion, it’s well worth having your comfy world shaken up by a master craftsman of Dürrenmatt’s calibre.

Evidence of Dürrenmatt’s subversive qualities (at least on yours truly): I’ve written three paragraphs and there’s no hint of a description, of what ‘The Execution of Justice’ is about. So, back to basics. Friedrich Dürrenmatt was a Swiss dramatist and writer, who died in 1990 aged 69. He was an early proponent of ‘epic theatre’, of which Bertolt Brecht was the most influential author, and besides a host of successful plays, he wrote several novels, most of them with a crime fiction flavour, his own version of it at least.

He started working on the ‘The Execution of Justice’ in 1957, when the story is actually set, though he published it in 1985, the time of his ‘Editor’s Afterword’. Dürrenmatt’s style is sharp, sombre and matter-of-fact, with echoes of Henning Mankell’s, yet it also manages to be so visually intense that a few of his novels made a successful transition to the screen, among them ‘The Pledge’, which was adapted both to TV and film, lately in 2001, starring Jack Nicholson directed by Sean Penn.

‘The Execution of Justice’ is the story of an obsession, a theme Dürrenmatt is very fond of. It is mostly told in the first person by a Zurich lawyer, Felix Spät, who is asked by a convicted criminal, a powerful local politician and industrialist, Dr Isaak Kohler, to reinvestigate the murder he was imprisoned for, starting from the premise that he didn’t commit it. The catch is that Dr Kohler did commit the crime in question, shooting a distinguished university professor in a crowded restaurant in the heart of the city, in full view of dozens of astonished patrons, including the head of the local police.

Adding insult to injury, and making Spät’s patently absurd task even more impossible, is the fact that Dr Kohler had seemingly no motive whatsoever to commit the crime. None that the police or the public prosecution could ever discover, none Kohler himself admitted to. Yet he was guilty as charged, duly sent to prison and is now serving his sentence. Justice was carried out, in other words, and yet it doesn’t quite feel so, without a motive (or a murder weapon, since the gun Kohler appeared to use was never found). This, and the need for money, for Spät’s practice was far from flourishing, is what convinces the young, relatively unexperienced lawyer to take on Dr Kohler’s absurd commission. And perhaps the fact Spät was/is in love with Kohler’s daughter Hélène.

I mentioned Dürrenmatt’s flouting of genre conventions, and the few details I gave so far are I think enough to prove my case. I also mentioned the unreliability of his characters: Spät tells his story in jerky backwards and forwards, from a present time in which he announces to the readers he is intent on killing Kohler, who in the meantime has been, incredibly, acquitted at a retrial, and then himself, as the only way out of the quagmire the ‘investigation’ has sunk him in, to flashbacks told when Spät is, by his own admission, wildly drunk or just back from a fling with a local prostitute. He is not the clearest of narrators, and he does hold a few things back now and again.

As do most of the other characters, from the Chief of Police to Hélène, to Stüssi-Leupin, a high-flying lawyer and Hélène’s lover, to Dr Kohler, the master puppeteer himself. Dürrenmatt delights in playing a wicked game with the readers, hiding facts in plain sight and having Spät embark on apparently meaningless digressions. Yet everything has a reason, or two, or more, and everything can have an explanation, or another, more likely the polar opposite of the first.

This is the game Dürrenmatt plays. There are so many layers, both structurally and psychologically, in ‘The Execution of Justice’, that I can only hope to give you a mere feel for what this extraordinary novel is like. You’ll have to be prepared to feel uncomfortable in reading it, as Spät himself was during his investigation. There will be no reassuringly clever detective helping you find a thread through the story. And the author himself will play merry hell with the readers’ expectations.

But if you surrender to the story’s flow, at times frantic, at times meandering, never dull, you’ll be transported, courtesy of Dürrenmatt and of John E. Woods’ assured translation, into another world, enjoying a rare, truly unique reading experience. Thank you, Pushkin Press, for taking something of an editorial risk in publishing Dürrenmatt: nothing ventured, nothing gained, and with a master of Dürrenmatt’s quality, the rewards for the readers are abundant. 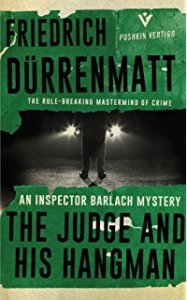 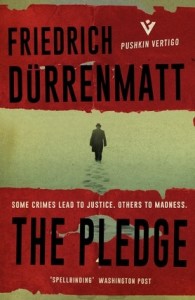 Nicola Mira is a translator from Italian and French, specialised in journalism and non-fiction texts. Educated in the UK (BA Politics & Economics, St. Edmund Hall, Oxford), he has lived and worked in Italy, France and the UK. He currently lives in Cambridge. He has a Diploma in Translation (Italian to English) from the Chartered Institute of Linguists and is a member of the Society of Authors/Translators Association and English PEN. He translates texts from a range of industries, with fashion journalism his main focus. You can view his fashion translations on FashionNetwork.com. He has contributed to ‘In Other Words’, the journal of the British Centre for Literary Translation, and to London literary magazine Litro, where he also published a translation of an excerpt from Italian early XXth century author Gabriele D’Annunzio. When he is not translating, Nicola loves reading, writing and sports. He is the managing editor of sports statistics website Greatest Sporting Nation.
View all posts by Nicola Mira →
« The Wife – Alafair Burke
Conviction – Julia Dahl »