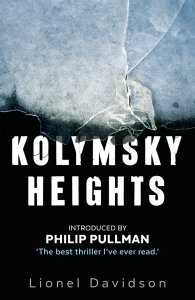 ‘Kolymsky Heights’ by Lionel Davidson was first published in 1994 and, having re-read this epic, atmospheric thriller in Faber & Faber’s fine 2015 edition I was left to reflect on what has changed in world politics and thriller fiction since the novel’s first publication, and on what has remained the same.

Far-away, mysterious, brooding Russia is still as threatening – in different though perhaps not unrelated ways – a country as it was then. And while contemporary thriller fiction can still strive to be as far-reaching in scope as Davidson’s – no easy task though –  the game its protagonists play has changed radically.

Fine writing too may have found newer expressions, but its imprint is unmistakable, and Lionel Davidson remains a wonderful narrator. Evocative, versatile, painstaking at research (even if, as Philip Pullman hints in his new preface, Davidson may have added his own imaginative elaboration to facts) and brilliant at both driving the plot and lending depth to his characters.

This is all the more remarkable as the story is layered and intricate, touching among several other things on ophthalmological science, Native American, Siberian and Inuit linguistics, the world of Japanese shipping, Siberian truck driving and how to self-assemble a jeep. And the main protagonists are very far from ordinary, yet deeply believable.

Four paragraphs and nothing about the plot? Hard to do concise justice to a novel that contains much more than a classic tale of how an undercover government agent goes deep into unknown enemy territory, digs for intelligence gold and may or may not come back alive to tell his story.

There even is a double prelude. One features a scatter-brained Oxford professor and a toff ex-student of his, a government chap as sinister as he’s coy about his activities. And another features a mysterious, perhaps slightly deranged Russian scientist engaged in menacing research while locked away somewhere well below the Siberian permafrost.

Lionel Davidson sets an intriguing tone by contrasting the safe world of Oxford academia with that of Russian biological weapons development, then surprises the reader by introducing Johnny Porter, his highly quirky but unforgettable hero.

Dr Johnny Porter in fact, a Gitskan Indian from British Columbia who’s prodigiously gifted at languages and has a degree in biology, as well as being a useful engineer and a mean fighter. A man of so many talents that readers may wonder how he manages to fit everything in, though he’s so far from the traditional spy hero, and his quest is pitted against such phenomenally hostile odds that you can’t not love him.

Russia and Siberia loom large as the novel’s other main characters. In 1994 glasnost hadn’t quite covered the 5,000-plus miles that separate Moscow from Chersky in northern Siberia, across some of the world’s harshest, most unforgiving environment. And the Russians and ethnic Siberians – Yakuts, Evenks and Chukchi – Johnny Porter meets are well-adapted to the brutal world they lived in, and as adept at making do with what they had then as they are now under a new leadership. Most of the story is about survival in hostile circumstances, be they the body-crunching grip of minus 50° cold, the hopeless outlook of village life in Siberia, or the near-impossible task of making it back to the West on your own from half a world away.

A fight without quarter, unrelenting, shorn of any Bondesque high-flyer niceties. No luxury hotels, fast cars or state-of-the-art gadgetry for Johnny Porter. Bare Soviet-era flats, rugged 1950s jeeps and labourer’s tools, and a stony mental hardiness that, Davidson seems to hint, just cannot be taught in any boot or secret agent camp but comes with being raised as the unloved child of a minority people.

We live in a faster-paced and supposedly more open world now. Spies don’t use anonymous letters and disappearing ink as the Russian scientist in the prologue did, but Twitter accounts and hackers. Perhaps, already in 1994 some of Lionel Davidson’s tools of the trade were a little dated: Bond’s 1995 ‘GoldenEye’ movie featured satellite-waged ‘star wars’. But the originality of Davidson’s fiction and of his characters, the drama of his plot twists and the power of his writing (not to mention the stolid brutality of the Russian leadership) remain fascinating and utterly contemporary, and well worth the read.

Nicola Mira is a translator from Italian and French, specialised in journalism and non-fiction texts. Educated in the UK (BA Politics & Economics, St. Edmund Hall, Oxford), he has lived and worked in Italy, France and the UK. He currently lives in Cambridge. He has a Diploma in Translation (Italian to English) from the Chartered Institute of Linguists and is a member of the Society of Authors/Translators Association and English PEN. He translates texts from a range of industries, with fashion journalism his main focus. You can view his fashion translations on FashionNetwork.com. He has contributed to ‘In Other Words’, the journal of the British Centre for Literary Translation, and to London literary magazine Litro, where he also published a translation of an excerpt from Italian early XXth century author Gabriele D’Annunzio. When he is not translating, Nicola loves reading, writing and sports. He is the managing editor of sports statistics website Greatest Sporting Nation.
View all posts by Nicola Mira →
« A Killing Winter – Tom Callaghan
White Crocodile – K. T. Medina »