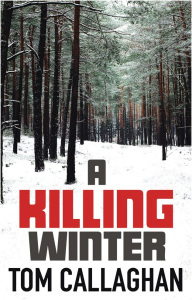 Cruel as a winter in Kyrgyzstan. Brutal like the fiercely-fought revolutions that have savaged this Central Asia republic, wedged between Uzbekistan and China. ‘A Killing Winter’, debut novel by Tom Callaghan, hurls the reader in a world that’s very far from the comfortable one we know. A world of corruption, poverty, tribal culture and crushed hopes, where bribery and butchery seem to be carelessly lived with. Not the Middle Ages though, this is 2015 and Murder Squad Inspector Akyl Borubaev, from the Kyrgyzstan capital, Bishkek, begins his workday investigating the death of a nameless young woman. She has been horribly savaged with a knife and left to die on the edge of a town park beneath a heavy snowfall.

Don’t expect fancy CSI or a high-tech murder hunt. Bishkek isn’t quite in the Middle Ages but still seems barely beyond the XIXth century. An unheeding lawlessness appears to permeate the fabric of society, or at least of the society gruff, cynical Akyl Borubaev has to deal with. Whores, pimps, krokodil addicts with festering sores, brawny musclemen and devious smugglers. Everyone at each other’s throat for a handful of the local currency, the most, or of the ubiquitous US dollars. Operating daily in this Gothic shadow-world, Akyl Borubaev is cast like a detective straight out of Mickey Spillane, but working and living in  a bleak Kyrgyz landscape that makes hard-boiled New York seem like a kindergarten.

Borubaev is violent, cunning and a handful with fists or guns. He’s also dedicated to law-enforcement and hopelessly grieving the deeply-loved wife he’s recently lost to cancer. He is lonely and alone and, miraculously, doesn’t drink vodka 24/7 as most of his compatriots seem to do. A Kyrgyz John Rebus minus the alcohol and with heftier firepower, just as tough and independent, in fact plain allergic to authority, despite being the Murder Squad’s crime-fighting star. So much of a star that, when the murder victim is identified as the daughter of a government minister, he’s the Chief of Police’s go-to guy. On the other side of the law,  everyone seems to have it in for him though, both for his manners and the nest of vipers he starts uncovering while investigating the crime. Everyone from petty crooks to the Circle of Brothers, the Kyrgyz mafia.

Vipers is a term of endearment really, as the body count mounts quickly and gruesomely and it soon becomes hard to fathom who’s on Borubaev’s side, if anyone at all.  Among the likely ones, Kursan, a distant relative on his wife’s side, a lifelong trafficker with a long criminal record, and Saltanat, a brooding beauty who claims to be working for the Uzbek Secret Service and is even deadlier than Borubaev with a gun.

‘A Killing Winter’ is not for the squeamish: Tom Callaghan doesn’t go easy on the violence and the savagery. Occasionally I wondered whether life in Kyrgyzstan really is so harsh and hopeless as he depicts it, my pampered Westerner’s suspension of disbelief stretched thin in places. But I just couldn’t stop reading on. Callaghan writes powerfully and works well with the plot, packing it with more twists than the roads up the Tienshan mountains on the Kyrgyzstan – China border, and is very hard to second-guess.

Borubaev himself has a hard time sorting out the motives for the killing spree that sweeps through Bishkek and around the country and parts of Uzbekistan too, even inside a tightly-sealed Russian military base. The scope of his investigations, and of this crime novel which works well as a political thriller too, is very wide. And the denouement is suitably surprising and satisfactory. I got there breathless and tense in the end, and look forward to the next investigation by the rugged Kyrgyz detective.