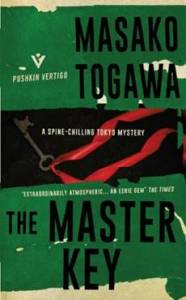 In ‘The Master Key’, the first novel by Japanese crime author Masako Togawa, reality is far from straightforward: it’s made of sliding layers, like shoji screens in Japanese houses, concealing and revealing in turns the life that goes on behind them, often showing its mere outline. The author delights in stunning readers with every unexpected shift of the setting, while the story ticks away like clockwork to a bitter, chilling climax.

Masako Togawa (1931-2016) was an incredibly eclectic woman, a Japanese award-winning crime author who was also a cabaret singer, nightclub owner, actress and feminist activist. She was born in Tokyo and, after her father’s early death, spent the rest of her childhood living with her mother in an apartment building for single women, which provided the inspiration for ‘The Master Key’, published in 1962.

Now published by Pushkin Press for their Vertigo imprint, in Simon Grove’s translation, ‘The Master Key’ is a shining example of the gems which can be unearthed in translated literature: the setting is unconventional and atmospheric, the cast of characters unique and the narrative structure is unlike anything I’ve come across in crime fiction before. Above all, it is an unsettling journey through the darkness of the human psyche, revealing the remorseless evil that can hide just beneath the veneer of civilised society – even one so ritualistic as Japan’s.

Togawa takes us back in time to bleak 1958 Tokyo, a city still reeling from the tragic aftermath of World War 2. In a brief, harrowing prologue, she actually plunges another seven years in the past, and has the daring to let her readers presume they know who committed a certain crime – though not his/her identity – and the fact that he/she will never be brought to justice.

In the authorial temerity stakes, this rates high enough, but Togawa, undaunted, ups the ante by not relying on one central character only in her novel, rather on a whole cast of cleverly sketched ones: chiefly, but not exclusively, the two receptionists and the various inhabitants of an apartment building for single women, a public institution halfway between retirement home and council house.

A few of the building’s inhabitants are portrayed by Togawa in finely crafted short chapters: lonely women, mostly retired, with their catalogue of foibles, pettiness and regrets. A former schoolteacher who passes her time writing to each of her students, one letter a day; a violin concert master forced to retire by a paralysis in one of her fingers, who hides a shameful secret; the widow of a scientist who is desperately trying to get his work published, though it’s probably worthless; a retired art teacher who refuses to interact with anyone else and sleeps in a wardrobe.

All of these women’s stories are cleverly interlinked, and converge inescapably towards a climax whose possibility looms over the whole narrative: the discovery of the crime described in the novel’s first section. Two people, one of them an inhabitant of the building, buried a child’s corpse in the building’s basement, a child who may or may not be the 4-year old son of an American-Japanese couple, who was kidnapped in 1951 and never found, alive or dead.

On some level, the novel works almost like a collection of short stories, whose downside, compared to a conventionally structured plot, is that readers who aren’t always on their toes risk losing the thread occasionally. Yet Togawa is brilliant in making the stories gradually coalesce into a unified narrative, linking them up in a way that slowly but irresistibly builds a crescendo of tension.

She creates a puzzle whose pieces gradually, unerringly slot into place, revealing a truly astonishing picture, one that will keep subtly changing until the final, stunning denouement.
The novel’s time structure, working backwards from the dark events in 1951,  is captivating, and another of the means used by Togawa to create and sustain tension, as she counts down to the moment of the building’s planned dismantling, an event which would bring definitive evidence of the crime to light, and potentially root one of the suspects out of hiding.

Togawa, in a dazzling display of authorial inventiveness, uses other devices, such as mixing first and third person narration, or that of the eponymous master key, which can open all of the building’s rooms and unlock all of its occupants’ secrets. Her writing is pared down, occasionally a little flat but highly effective. Above all, the novel’s appeal lies in how virtually everyone, from (most of) the characters to the readers, are shrewdly manipulated by a series of unreliable narrators, and by the ultimate unreliable narrator of all, the author herself.
The world Togawa describes is far from the contemporary and the familiar. Yet it does come fully alive through her pitch-perfect narration of the characters’ lives, actions and thoughts. The deductive process at the end is perhaps a little thin, though the pace and tension mount steadily, and the body count does too. Yet, if you’re looking for a classic whodunnit with a proper investigator, a set of potential suspects and a linear time progression, ‘The Master Key’ is probably not your cup of tea. The same if you want action and adrenaline galore.
But if you seek a wickedly original, clever crime novel, a brilliant exploration of the weaknesses of the human mind, I strongly recommend you lose yourself in Togawa’s acutely portrayed sketch of this array of elderly ladies (plus the occasional gentleman), and of their mesmerizing desires and pitiless crimes.

Nicola Mira is a translator from Italian and French, specialised in journalism and non-fiction texts. Educated in the UK (BA Politics & Economics, St. Edmund Hall, Oxford), he has lived and worked in Italy, France and the UK. He currently lives in Cambridge. He has a Diploma in Translation (Italian to English) from the Chartered Institute of Linguists and is a member of the Society of Authors/Translators Association and English PEN. He translates texts from a range of industries, with fashion journalism his main focus. You can view his fashion translations on FashionNetwork.com. He has contributed to ‘In Other Words’, the journal of the British Centre for Literary Translation, and to London literary magazine Litro, where he also published a translation of an excerpt from Italian early XXth century author Gabriele D’Annunzio. When he is not translating, Nicola loves reading, writing and sports. He is the managing editor of sports statistics website Greatest Sporting Nation.
View all posts by Nicola Mira →
« Nine Lessons – Nicola Upson
This Is How It Ends – Eva Dolan »