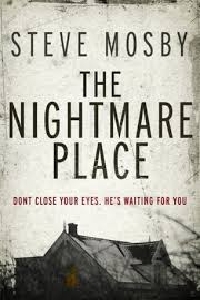 Steve Mosby is a Leeds lad and that makes him almost a neighbour to me. I’ll definitely be taking a look at The Nightmare Place, but not after sunset. It’s a very dark tale indeed.

The Creeper is a stalker who breaks into the bedrooms of sleeping women. His attacks seem random and DI Zoe Dolan can’t find a pattern. All she knows is that the violence is getting worse and she has no idea where to look for its perpetrator.

Jane Webster is a volunteer on a confidential helpline. One night, she gets a call from a strange man who says he loves the women he attacks. Could he be the Creeper? There’s a ring of truth to what he says, but can she go to the police?

For Jane, Zoe and all the other young women of the city, nowhere is safe. Particularly their own bedroom at the dead of night…

Steve Mosby is the author of The Third Person, The Cutting Crew, The 50/50 Killer, Cry for Help, Still Bleeding and Black Flowers. He won the 2012 CWA Dagger in the Library award, voted for by librarians. There can be no higher praise – librarians really do know their stuff.  While his sales haven’t really taken off in the UK yet, the critics love him for his finely detailed characterization and intricate plotting. He’s someone to watch.

Steve also deserves huge credit for chairing the programming panel for the Theakstons Old Peculier Crime Writing Festival. Taking place in Harrogate, Yorkshire, in July, this is the UK’s best. It boasts an absolutely stellar line-up, including Ann Cleeves, Val McDermid and Robert Galbraith. And for those of you who didn’t know – Theakstons Old Peculier (no mis-spelling) is a type of ale, much loved by all right-minded Northern English people. Cheers!

My name is Linsey and I love crime fiction. The rebel in me likes to see rules broken, and the mother in me feels a need to see order restored - perhaps it’s a Freudian thing. I love the dark introspection of Scandinavian crime fiction; the beauty and cruelty of the Italian giallo and a nice big slice of US hard-boiled psychological thriller. As soon as I decide where I’m going on holiday, I’ll find a fictional detective who lives there – yes, I want to see the sites, but I also want to read the underbelly. That’s what’s so great about crime fiction. I’m a freelance writer, based in Manchester England; a city with a few crime writers of its own. If you’re planning a holiday here, look up Cath Staincliffe, Val McDermid, Chris Simms, Bill Rogers and others. And if you need a writer, take a look at my website – but I’m not showing you my underbelly.
View all posts by Linsey Parkinson →
« To the Top of the Mountain – Arne Dahl
Crime fiction blogs worth investigating (part 6) »