To the Top of the Mountain – Arne Dahl

To the Top of the Mountain – Arne Dahl 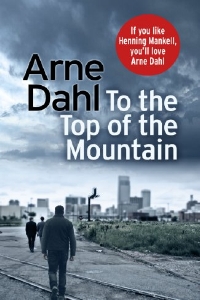 I came to love Arne Dahl through the BBC4 TV series.  A crack team of elite detectives is brought together to solve a range of complex and violent international crimes. When something’s going down, the team leaps into an eco-friendly minibus to go and investigate.  Very scandi cool. To the Top of the Mountain is the third outing for the members of the Intercrime squad. The novel was first published in its native Sweden in 2000, so I’m not sure why it’s taken so long for the release of an English translation, but Harvill Secker have finally got there.

After a disastrous end to their previous case, the Intercrime team has been disbanded and their leader forced into early retirement. The six officers have been scattered throughout the country. Detectives Hjelm and Holm are investigating the senseless murder of a young football supporter in a pub in Stockholm, but finding that all is not what it seems; Söderstedt and Norlander are working on seemingly mundane cases; Nyberg is tackling child pornography while Chavez is immersed in research.

When a man is blown up in a high-security prison, a major drugs baron comes under attack and a massacre takes place in a dark suburb, the team is urgently reconvened. There is something dangerous approaching Sweden, and they are the only people who can do anything to stop it.

This is a multi-layered tale, where seemingly unrelated incidents turn out to be connected to an ever-spreading network of crime and violence, which respects no borders. The Intercrime cast of characters is a fascinating unit with a great dynamic. Each member has his or her own talents and specialisms, personal issues and motivations (my favourite is Söderstedt, the clever, ironic one).

There are ten novels in the Intercrime series, though you’ll only find this one, The Blinded Man and Bad Blood in English translation. Let’s hope we won’t have to wait too long for the follow-ups.

To the Top of the Mountain – Arne Dahl: buy online on Amazon

My name is Linsey and I love crime fiction. The rebel in me likes to see rules broken, and the mother in me feels a need to see order restored - perhaps it’s a Freudian thing. I love the dark introspection of Scandinavian crime fiction; the beauty and cruelty of the Italian giallo and a nice big slice of US hard-boiled psychological thriller. As soon as I decide where I’m going on holiday, I’ll find a fictional detective who lives there – yes, I want to see the sites, but I also want to read the underbelly. That’s what’s so great about crime fiction. I’m a freelance writer, based in Manchester England; a city with a few crime writers of its own. If you’re planning a holiday here, look up Cath Staincliffe, Val McDermid, Chris Simms, Bill Rogers and others. And if you need a writer, take a look at my website – but I’m not showing you my underbelly.
View all posts by Linsey Parkinson →
« A Better World – Marcus Sakey
The Nightmare Place – Steve Mosby »