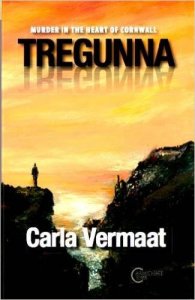 ‘Tregunna’ by Dutch author Carla Vermaat, writing her twenty first novel in English (some using the nom de plume Mary Morgan), ranks among the most original crime stories I have read this year. The setting, to me at least, was a discovery:  the Cornish coast and the town of Newquay, which Vermaat paints so vividly, give the reader as strong a sense of place as can be found for example in Peter  May’s Isle of Lewis novels. Then there is Vermaat’s choice of lead investigator, which is bold, to say the least. Detective Inspector Andy Tregunna, in his early forties, is a lone and perhaps lonely man with an unhappy marriage behind him. And he is seriously ill, needing surgery for colon cancer, so that he has to be taken off his first murder case: the stabbing of a middle-aged woman, found on the edge of a supermarket car park in Newquay by two young children and their bewildered mother. But he doesn’t give up. Perhaps because he simply wants to feel, and stay, alive, he doesn’t stop trying to make sense of a murder which makes no sense at all to the police and to the victim’s only relative, her daughter.

Jane Croft, the victim,  was an unassuming, quiet person, who had been left by her husband for another woman and who carried on as normally as possible with her life. But what is ‘normal’? Certainly nothing that can be neatly packaged and labelled, as Vermaat gradually shows the reader through her deft psychological insights. The author builds  up her characters painstakingly, by careful observation of the minute details that make up their lives. The reader needs some patience early on, for this is no tear-away plot. Action cop lovers, be warned. But such patience will be amply rewarded. By a slow, precise process of accretion, Vermaat fleshes out men and women which are real because they are both reassuringly ‘normal’ and also, inevitably, a little flawed. Or very much so. By the end of the novel, we could in fact be excused for believing there is no ‘normal’.

As a contemporary crime story, ‘Tregunna’ is also original for being relatively low-tech (crime detection-wise) and apparently slow-paced, as might befit idyllic Cornwall. Only apparently though. While Vermaat shies away from action sequences and car chases – hard to do them if your lead detective is recovering from a cancer operation – her ability at concealing, and then unpeeling the story layer by layer, makes for tense reading.

Even if the initial investigation seems to peter out into nothingness, Vermaat draws the reader in by opening new vistas on the psychology and actions of her leading characters: Tregunna is frustrated at the investigation and fears for his health, another stark reminder that ‘normal’ can be, sadly, far from pleasant; Jane Croft’s estranged husband turns out to have died only six months before his ex-wife, knifed to death in what was dismissed as a gangland mugging gone wrong; two potential witnesses to the dumping of Jane Croft’s dead body offer curiously conflicting evidence, and one of them, an attractive  woman called Marie, shows an uncanny ability for getting under the inspector’s skin. There are layers aplenty, keeping the reader busy and interested.

‘Tregunna’ is an original murder mystery and at the same time a satisfying example of one of crime writing’s classic canons: a country (or coastal in this case) setting, a small, tight-knit  community, an apparently motive-less murder, a local police force that has to solve it with limited means. I could label this a classic British canon, though there are strong echoes of Henning Mankell and his Kurt Wallander in Vermaat’s story,  and not just because Newquay could very well be swapped for Sweden’s Ystad (same population, by the way). Just as in many Wallander stories, it will be down to the doggedness, instinct and courage of one man alone, Andy Tregunna in this case, to bring a semblance of normality where the ugliness of violence has torn lives apart, and he will go about it in un understated, almost humble way that is both unconventional and captivating. And certainly deserving another story, and another good read.

Nicola Mira is a translator from Italian and French, specialised in journalism and non-fiction texts. Educated in the UK (BA Politics & Economics, St. Edmund Hall, Oxford), he has lived and worked in Italy, France and the UK. He currently lives in Cambridge. He has a Diploma in Translation (Italian to English) from the Chartered Institute of Linguists and is a member of the Society of Authors/Translators Association and English PEN. He translates texts from a range of industries, with fashion journalism his main focus. You can view his fashion translations on FashionNetwork.com. He has contributed to ‘In Other Words’, the journal of the British Centre for Literary Translation, and to London literary magazine Litro, where he also published a translation of an excerpt from Italian early XXth century author Gabriele D’Annunzio. When he is not translating, Nicola loves reading, writing and sports. He is the managing editor of sports statistics website Greatest Sporting Nation.
View all posts by Nicola Mira →
« Interview with CHRIS PAVONE (author of ‘The Travelers’)
Hard Cold Winter – Glen Erik Hamilton »