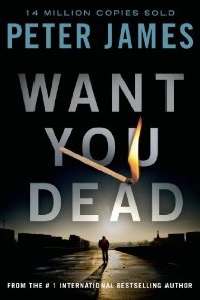 I’ve been looking forward to this: the moody shots of a pier in the half-light, the dark shadows lurking around the fairground… It’s got to be the cover of the newest book to feature Brighton’s DSI Roy Grace. Want You Dead by Peter James is the tenth book in this series and it’s out just in time for a nice juicy holiday read. Online dating is becoming a fertile ground for thriller writers: we launch our emotional hopes online and we trust what comes back to us – perhaps a little too readily.

When Red Westwood meets handsome, charming and rich Bryce Laurent through an online dating agency, there is an instant attraction. But as their love blossoms, the truth about his past, and his dark side, begins to emerge. Everything he has told Red about himself turns out to be a tissue of lies, and her infatuation with him gradually turns to terror.

Peter James’ books have sold more than 13 million copies worldwide and been translated into 35 languages. They include twenty novels in addition to the ten in the Roy Grace series.

I admit to having a slight personal bone to pick with James. Grace’s debut, Dead Simple, was so impossible for me to put down that rather than being a light holiday read on a trip to Paris, it became an obsession and I couldn’t go out until I’d finished it.

2014 holds lots to look forward to if you’re a James fan: DSI Roy Grace will appear in theatres across the UK for the first time in a new play: The Perfect Murder.  Want more? How about a short story featuring Grace, alongside DI John Rebus? It’s coming…

My name is Linsey and I love crime fiction. The rebel in me likes to see rules broken, and the mother in me feels a need to see order restored - perhaps it’s a Freudian thing. I love the dark introspection of Scandinavian crime fiction; the beauty and cruelty of the Italian giallo and a nice big slice of US hard-boiled psychological thriller. As soon as I decide where I’m going on holiday, I’ll find a fictional detective who lives there – yes, I want to see the sites, but I also want to read the underbelly. That’s what’s so great about crime fiction. I’m a freelance writer, based in Manchester England; a city with a few crime writers of its own. If you’re planning a holiday here, look up Cath Staincliffe, Val McDermid, Chris Simms, Bill Rogers and others. And if you need a writer, take a look at my website – but I’m not showing you my underbelly.
View all posts by Linsey Parkinson →
« Interview with Khaled Talib (author of Smokescreen)
Crime fiction blogs worth Investigating (part 2) »