A Purity of Vengeance – Jussi Adler-Olsen

A Purity of Vengeance – Jussi Adler-Olsen 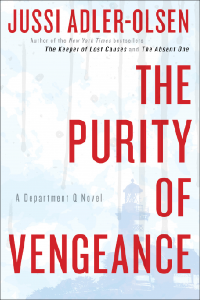 Copenhagen-born author Jussi Adler-Olsen may be a relatively new name (to me at least), but he has sold over 14 million books around the world. And for a writer who began his career compiling a comic encyclopedia and writing books about Groucho Marx, the Department Q cold case series is very serious stuff indeed.

A Purity of Vengeance (re-titled Contempt in the UK) opens in 1987, when Nete is planning revenge on those who have abused her. Her list includes Curt Wad, a surgeon who was part of a movement to sterilise ‘wayward’ girls in 1950s Denmark.

More than 20 years later, Detective Carl Mørck is assigned a cold case: Rita, a brothel owner, whose disappearance has remained unsolved since the eighties. When Carl’s team discover that a number of other people disappeared around that same weekend, things start to get much more serious – and a lot less cold. As they sift through the evidence, they get closer and closer to Curt Wad and start to uncover the horrifying depths of his capacity for evil.

It seems that the Department Q novels in English translation all have alternative names. American readers may want to look out for The Keeper of Lost Causes, The Absent One and A Conspiracy of Faith. British readers may know those same books as Mercy, Disgrace, Redemption and Contempt respectively. Jussi Adler-Olsen has enjoyed huge success in Austria, Iceland and Norway, as well as the New York Times list, and his work now appears in 35 languages. In 2012, he became Germany’s favourite thriller author – and the Germans certainly know their crime fiction, having championed the beyond-wonderful Wallander creator, Henning Mankell.

Like many Europeans, I love Scandinavian crime novels: their dark, often bleak, realism speaks to something in us all. I’m certainly looking forward to getting to know Detective Mørck.

My name is Linsey and I love crime fiction. The rebel in me likes to see rules broken, and the mother in me feels a need to see order restored - perhaps it’s a Freudian thing. I love the dark introspection of Scandinavian crime fiction; the beauty and cruelty of the Italian giallo and a nice big slice of US hard-boiled psychological thriller. As soon as I decide where I’m going on holiday, I’ll find a fictional detective who lives there – yes, I want to see the sites, but I also want to read the underbelly. That’s what’s so great about crime fiction. I’m a freelance writer, based in Manchester England; a city with a few crime writers of its own. If you’re planning a holiday here, look up Cath Staincliffe, Val McDermid, Chris Simms, Bill Rogers and others. And if you need a writer, take a look at my website – but I’m not showing you my underbelly.
View all posts by Linsey Parkinson →
« Saints of the Shadow Bible – Ian Rankin
A Song for The Dying – Stuart MacBride »