A Song for The Dying – Stuart MacBride

A Song for The Dying – Stuart MacBride 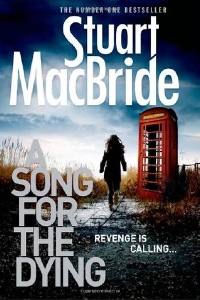 Scotsmen make excellent football managers and they also make excellent thriller writers. I’ve often wondered if there’s a link and just what it might be. I’ll avoid clichés like ‘gritty determination’ and ‘dark imaginings’, I’ll just leave it for you to ponder for yourselves.

Our next offering, A Song for The Dying is by Dumbarton-born Stuart MacBride.

This is the second novel to feature Ash Henderson, first seen in Birthdays for the Dead, and hopefully the start of a series. Henderson’s a former Detective Inspector, who investigated the ‘Inside Man’ murders eight years before. Four women died and three were left in critical condition: all had a plastic doll stitched inside their stomachs. Then the killings stopped. Since then, Henderson’s family has been destroyed, his career is in tatters, and a vicious criminal is making sure he spends the rest of his life in prison.

Now a nurse has turned up dead on a patch of waste ground, a plastic doll buried beneath her skin.  Perhaps Henderson may finally get a shot at redemption – and revenge.

MacBride grew up in Aberdeen in North East Scotland. He is the number one bestselling author of several novels featuring DS Logan McRae. His work, which includes Cold Granite, Dying Light, Flesh House, Dark Blood and Shatter the Bones, has been twice shortlisted for the Theakstons’s Old Peculier Crime Novel of the Year Award. He won the 2007 Crime Writers’ Association Dagger in the Library award and was inducted into the ITV3 Crime Thriller Hall of Fame in 2012.

Despite the darkness of his fictional work, MacBride is a witty and engaging writer. His wonderful website – http://www.stuartmacbride.com – includes a DIY printable beard kit and just about the best mushroom soup recipe I’ve ever seen. What’s not to like?

My name is Linsey and I love crime fiction. The rebel in me likes to see rules broken, and the mother in me feels a need to see order restored - perhaps it’s a Freudian thing. I love the dark introspection of Scandinavian crime fiction; the beauty and cruelty of the Italian giallo and a nice big slice of US hard-boiled psychological thriller. As soon as I decide where I’m going on holiday, I’ll find a fictional detective who lives there – yes, I want to see the sites, but I also want to read the underbelly. That’s what’s so great about crime fiction. I’m a freelance writer, based in Manchester England; a city with a few crime writers of its own. If you’re planning a holiday here, look up Cath Staincliffe, Val McDermid, Chris Simms, Bill Rogers and others. And if you need a writer, take a look at my website – but I’m not showing you my underbelly.
View all posts by Linsey Parkinson →
« A Purity of Vengeance – Jussi Adler-Olsen
Stay Alive – Simon Kernick »